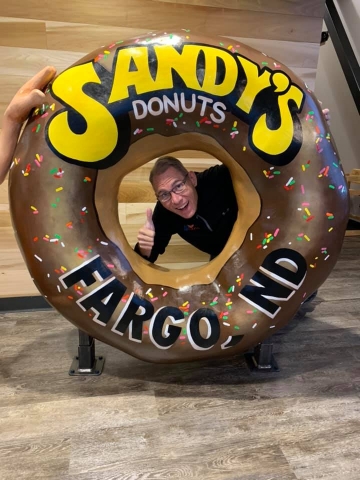 Scott Hennen, host of What's On Your Mind on AM 1100 The Flag and AM 1090 KTGO, poses inside the large donut at the inaugural opening of the new Sandy's Donuts location at 4215 45th Street South, in the Osgood area.

Sandy's Donuts is gaining steam in the Fargo-Moorhead metro, with another location opening on Wednesday morning in the Osgood area. The location's address is 4215 45th Street South.

Mark Ostlund, son of the namesake for the store, Sandy Ostlund, tells WZFG's Scott Hennen the business has grown what Sandy originally had planned for the franchise. Mark says he is "amazed" and that his dad, Sandy, "would probably think we're nuts, because it's a lot more than he thought it ever would be. He was thinking it would be a little mom and pop shop."

The new location was built from the ground up, Mark says, making it a fun project to see come to reality.

The Osgood location joins in downtown Fargo and West Fargo and will serve everything the other locations serve.

Why Osgood? The answer is simple, according to Mark.

He says the location is in the heart of the growing part of Fargo, and is easy and convenient to get to, making it the ideal location for expansion of a business that already is booming in its other locations across Fargo and West Fargo.

The brand Sandy's Donuts has grown on its own, Mark says, and it all started with his father, who he says knew how to make a good donut.