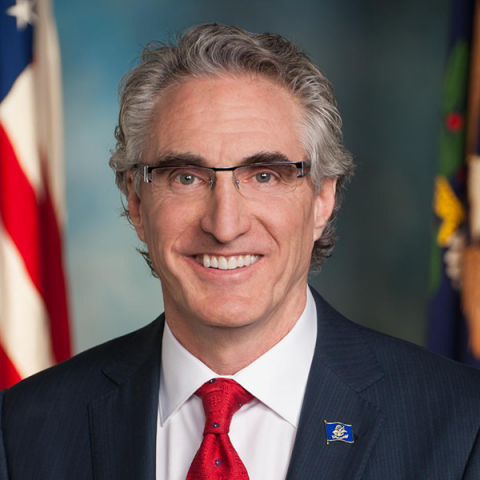 Gov. Doug Burgum and Lt. Gov. Brent Sanford today presented the 2019 Governor’s Awards for Excellence in Public Service, recognizing team members for their outstanding work in state government and making a positive difference in the lives of North Dakotans.

“Team North Dakota goes above and beyond to serve our citizens and deliver on our shared purpose – to Empower People, Improve Lives and Inspire Success,” Burgum said. “The record number of nominations we received this year highlights the exceptional work of our team members, and we are incredibly grateful to these individuals and their teams for their commitment to our state and its citizens.”

Team members across North Dakota submitted a record 534 nominations this year. The awards were presented during a luncheon at the Capitol during State Team Member Recognition Month.

The awards and recipients are:

Telegraph Award for Excellence in Technology: Ryan Kramer, enterprise architect with North Dakota Information Technology, for his role in developing a cloud network framework and a zero-trust security framework to support secure and efficient data storage, as well as his role in the creation of a statewide 100-gigabit network increasing connectivity across the state and in particular for K-12 students – initiatives that have made North Dakota a national leader.

Pioneer Award for Excellence in Innovation: Troy Gilbertson, Fargo District maintenance coordinator with the North Dakota Department of Transportation, for his innovative vision using existing equipment for new solutions. His vision has saved the state time and money, and in one example has reduced the time needed to seal bridge decking from four to six hours to 15-20 minutes while increasing quality and lessening impact on travelers.

Zezula Award – “One Who Helps”: Jamie Krous, senior program analyst with the North Dakota Department of Public Instruction, for her efforts in helping create DPI’s first-of-its-kind, interactive, statewide accountability dashboard for schools and for her commitment to serving as a resource for others.

Landmark Award for Excellence in People Management: Ryan Gardner, regional park manager with North Dakota Parks and Recreation, for creating a team environment that emphasizes professional development and investing in team members to best serve North Dakotans, and for his role as a thought leader within the agency.

Frontier Award for Excellence in Continuous Learning: Laural Sehn, budget specialist with the Department of Human Services, for her role in the implementation of Social Services Redesign, both as a fiscal specialist and source of knowledge for counties and other stakeholders in the transition to zoned social services.

Harvest Award for Excellence in Quality: Pamela Helbling-Schafer, director of the North Dakota Veterans Cemetery, for her service to veterans, carefully maintaining their final resting places, preserving their histories for the benefit of all North Dakotans and serving grieving families with professionalism and compassion.

Sodbuster Award for Excellence in Growth Mindset: Penny Hetletved, director of education, staff development and training, and core correctional practices with the North Dakota Department of Corrections and Rehabilitation, for her role in increasing and improving educational opportunities for residents within North Dakota’s corrections and rehabilitation system, leading the agency to some of the highest GED passage rates in the nation and integrating a growth mindset into agency policy.

Roaming Bison Award (Team): K-20W Initiative team, consisting of more than 40 agency and private partners, for developing a first-of-its-kind, comprehensive cyber education strategy for North Dakotans at every level from kindergarten through Ph.D. and into the workforce. This initiative is providing students with increased learning opportunities to develop skills to support success in a 21st century workforce, while making North Dakota a national leader in cyber education. Receiving honorable mention for the award was the Title IV-E Foster Care Agreement team, for their work improving outcomes for children and families through tribal engagement.