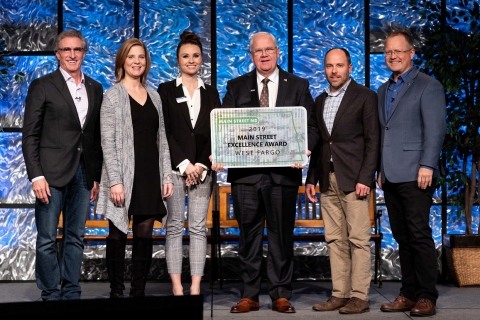 The City of West Fargo was awarded the Main Street Excellence Award by Governor Doug Burgum and Lt. Governor Brent Sanford during the 2019 Main Street Summit Wednesday, Oct. 30, 2019, in Bismarck, North Dakota. The City of West Fargo was selected in the large city category for this award in recognition of the downtown revitalization efforts that started in 2016 and has transformed Sheyenne Street from Main Avenue W. to Seventh Avenue W.

“In the past 20 years, the City of West Fargo has more than doubled its population and land area,” said Commission President Bernie Dardis. “While much of the city’s focus has been on booming residential and commercial development, the downtown revitalization takes that a step further by adding amenities, community development, and the intangible elements that make a city special.”

The downtown revitalization in West Fargo represents a public-private partnership that is bringing more than $40 million in redevelopment to the core area of town along north Sheyenne Street. This revival includes five new mixed-use buildings, a civic plaza, branding and future street improvements to promote walkability and livability in the area

“This whole process started in 2013, and it is important to note that past commissioners and staff members and leaders in our community and downtown, as well as the current commission and staff have been working hard to make this happen and get us to this point,” said Commission President Dardis. “We also accept this award along with our private partner, EPIC Companies, and thank them for their leadership and vision to help make this happen.”

The Main Street Excellence award recognizes communities whose efforts emulate the three pillars of Main Street success – smart, efficient infrastructure; 21st century workforce; and healthy, vibrant communities. The City of West Fargo’s downtown revitalization was able to demonstrate activity across all of these pillars through infill projects that are cost-effective and utilize existing infrastructure, job creation through new businesses and business relocations to downtown and a focus on community spaces and walkability through the civic plaza and future road diet.

“EPIC Companies can’t thank the City of West Fargo, and all partners and investors who have worked to revitalize downtown West Fargo enough,” said McKenzy Olson, EPIC Companies vice president of marketing and public relations. “The City of West Fargo has believed in the shared vision of bringing residential and commercial space to the downtown area in order to enhance the growing community. It is a valued partnership that has been created and we look forward to what’s yet to come in West Fargo through this partnership.”

During the awards ceremony, Lt. Governor Sanford highlighted the City of West Fargo’s desire to increase the tax base and community engagement to ensure the community is an enjoyable and affordable place for citizens to live and work.