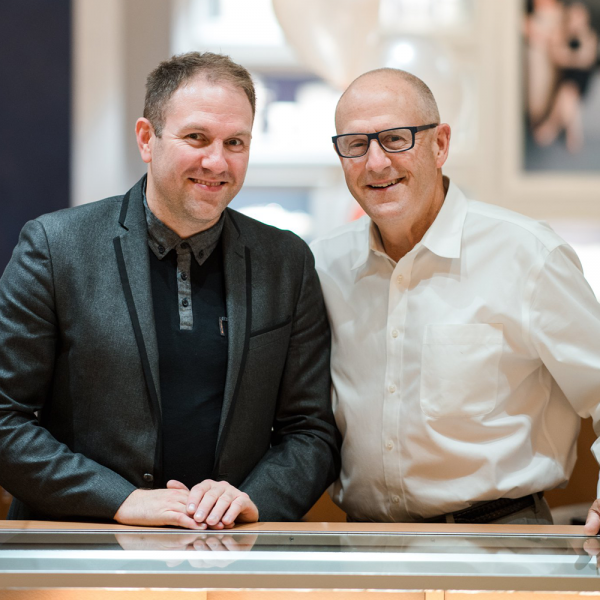 Brad and Aaron Wimmer, the father-son owners of Fargo jewelry store Wimmer’s, are set to rappel 110 feet down the side of the Black Building in Downtown Fargo on August 10th as part of the Over the Edge fundraiser benefiting CHARISM.

“Both of us are fairly terrified of heights, so when dad suggested we take part in Over the Edge, I was sure he was joking,” says Aaron of his father, Brad. “Once I realized he was serious, I did my best to match his enthusiasm, while trying to keep my face from reflecting the fear I was feeling from thinking about doing such a thing.”

While Brad’s desire to take part in Over the Edge seemed like a spontaneous decision to Aaron, he explained that it is something he has wanted to do since learning about the fundraiser last summer. “WhenOver the Edge came to Fargo last year, I walked to the Black Building to see what it was all about,” says Brad, co-owner of Wimmer’s. “As I watched the first rappellers descend towards the cheering audience below, I knew this was something I wanted to be a part of, and what better person to do it with than my son, Aaron.”

“It’s going to be a lot of fun; the element of fear combined with doing it next to my dad is only going to make it more memorable,” says Aaron. “We feel fortunate to be able to help raise money for such a worthy cause, and to do so in a unique and exciting way is always going to be a bonus.”

The event will begin with the first rappellers at 9:00 AM on Friday, August 10th and will feature rappellers every 20 minutes throughout the day. On the ground will be entertainment, food and tables for any who wish to watch and cheer on those participating.