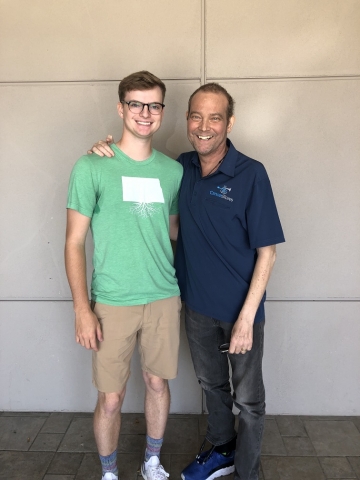 In 2018 North Dakota State University Music Education major Isaac Hicks registered as a donor of marrow stem cells with Be the Match, the global leader in bone marrow transplantation.  Hicks was inspired to register because of his music hero, Dallas Symphony Orchestra principal trumpet player Ryan Anthony, who visited and performed a concert in Bismarck, ND a few years prior. Anthony was diagnosed in 2012 with multiple myeloma and became a marrow stem cell recipient. Anthony created the Ryan Anthony Foundation to raise money for cancer research and raise awareness through concert performances with world-renown musicians. He collaborated with colleagues to create the Cancer Blows: Thirty Trumpet Legends, One Moment in Time, Determined to Help Blow Cancer Away album which features musicians from all over the world.

Eight months after registering he received a call that he was a potential match with a possible recipient. According to BeTheMatch.org a patient’s likelihood of finding a matching donor is estimated to range from 19-80%, and about 8% of registered members who complete additional testing will actually donate. Additional testing confirmed that he was a match with a patient from Europe who was suffering from lymphoblastic leukemia and in need of a marrow stem cell transplant. Hicks completed three additional rounds of bloodwork which verified that he was a healthy match and able to donate. Details were finalized, appointments were scheduled, and flights were booked. Isaac traveled to Cook’s Children’s Hospital in Dallas, Texas for the procedure, accompanied by his girlfriend, Sara Schroeder. All expenses were paid by Be the Match including travel, lodging, dining, and the cost of the medical procedure. As luck would have it, Ryan Anthony lives in Dallas Texas and while there for his procedure Hicks got to meet his longtime hero. The two enjoyed talking about music together and Anthony expressed that Isaac was his hero. Hicks was potentially saving someone’s life.

Hicks’ marrow stem cell retrieval went smoothly and they collected the maximum amount possible for the recipient in need. Hicks chose to learn as little as possible before the procedure and while in recovery he opted to learn a little more about the surgery. The seriousness of being a donor and following through with the donation could mean life or death for a waiting recipient. The hope with a transplant is that the new bone marrow will jumpstart the patient’s existing bone marrow to make more white blood cells. Five days prior to the operation the recipient’s immune system is medically shut down to purposely eliminate their white blood cells. In order for a person to be a donor, extra measures are taken to ensure donors understand the seriousness of their commitment. He never considered backing out for a second and explained that “if anyone in my family would need this I would hope they do it for them”.

Hicks received positive encouragement from both his family and his teachers at the Challey School of Music. With blood work, a physical, surgery, and recovery he only missed two and half weeks of school spread out over a few months and all of his teachers were more than willing to accommodate his modified schedule. Two days after surgery he came back to Fargo and performed a gig he already had lined up. Hicks was inspired by Ryan Anthony who would often drive from chemotherapy straight to a performance without skipping a beat.

On December 7th Hicks received a letter that informed him that the donation worked and it did, in fact, save the recipient’s life.

A message from Hicks: “I am grateful that the faculty here at the Challey School of Music have accommodated this wonderful opportunity. After recovering I decided to start a registry drive for our community called Fargo4aCure.

Isaac encourages everyone to consider being a donor. Further information can be found at join.bethematch.org/fargo4acure.