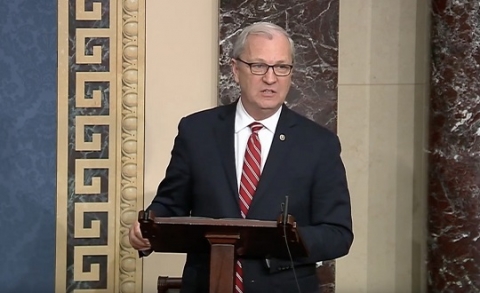 “I believe such a resolution is designed to hurt our President politically in the short-term while inflicting long-term damage to our national security and military readiness,” said Senator Cramer.

Senator Cramer began his remarks stressing the legality of President Trump’s decision to carry out the strike on Iranian General Qassem Soleimani.

“I want to emphasize an overlooked point: General Soleimani was killed in Iraq, not Iran. He was with another known terrorist driving to meet militia members who recently fired rockets at Americans – killing an American contractor with rocket fire – and tried to storm our embassy, which is sovereign United States territory,” continued Senator Cramer. “Whether through an existing Authorized Use of Military Force or the War Powers Act, President Trump was well within the legal bounds to take action against a known terrorist sitting in Iraq plotting attacks against the United States. It would have been culpable negligence to not act.”

The Senator concluded his remarks by praising President Trump for successfully de-escalating tensions with Iran, outlining the negative consequences of passing this resolution, and urging his fellow Senators to oppose it.

“Whether through personal animosity toward our President or a misunderstanding of the importance of deterring our enemies, some in this chamber are advocating for changes that would make our country less safe,” concluded Senator Cramer. “I will not support their effort and I urge the rest of my colleagues to do the same.”