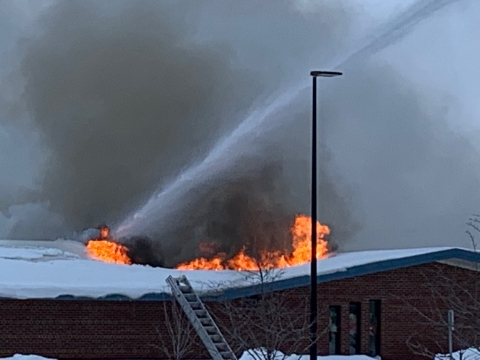 11:00 P.M. UPDATE: We now know that two Fargo firefighters sustained minor injuries while battling the fire this afternoon and evening at Elim Care and Rehab Center in Fargo. Fargo fire officials say both have been treated and released.

6:35 P.M. UPDATE: Fire officials in Fargo call it a fire with 'significant' damage. It took fire crews from all over the metro area to battle a blaze Thursday afternoon at Elim Care and Rehab Center. The cause of the fire is currently unknown. Fire officials said earlier Thursday that everyone in the building was able to get out safely. Crews from Fargo, Moorhead and West Fargo remained on scene into the evening hours, checking for hot spots and dealing with a roof that had collapsed earlier in the day Thursday. The call came into officials at around 3 p.m. Thursday afternoon.

4 P.M. UPDATE: Fargo Fire Chief Steve Dirksen says all tenants in the building are safe, and that, upon arrival by the fire department, flames could be seen coming out of the building. The department set up a "defensive" using ladder trucks. Crews are currently inside of the building attacking the fire.

No injuries have been reported as of 4 p.m.

Citizens are asked to stay away from the area.

ORIGINAL STORY: Valley News Live reports that crews are on the scene of a fire at Elim Rehab and Care Center in Fargo. The Center is located on University Drive South.

The call came in around 3 p.m. on Thursday afternoon.