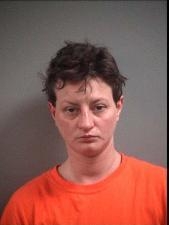 A Northwood woman has been charged with two felonies following an incident Sunday night in the City of Northwood, in Grand Forks County.

Court documents state that, on Sunday at approximately 9:38 p.m., deputies with the Grand Forks County Sheriff’s Office responded to a report of a male subject with a gunshot wound. Law enforcement and emergency medical personnel attempted lifesaving measures on the male subject, which were unsuccessful. The male was pronounced dead at the scene.

Through an investigation, it was learned that Wilson utilized a nine-millimeter pistol to fire at least one round, striking the male in the area of the chest and throat.

Wilson was placed under arrest and transported to the Grand Forks County Correctional Center. Prior to arriving at the correctional center, Wilson became uncooperative, court documents say.

She began banging her head on the windows and cage of a patrol vehicle. When personnel from the correctional center attempted to take custody of Wilson, she intentionally spit blood onto at least one correctional officer.

Wilson is scheduled to make an initial appearance in Northeast Central District Court, in Grand Forks County, on Tuesday morning.