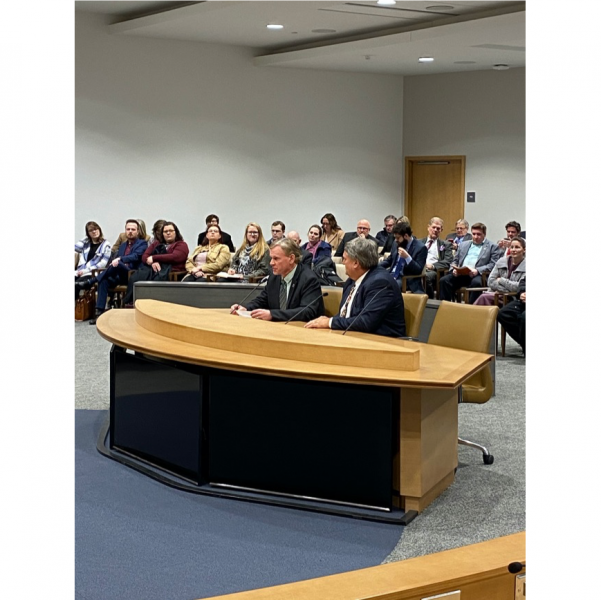 Farmers interested to find out more about the RFA program can find more information at https://www.mda.state.mn.us/financebudget/agfinance, or by contacting Senator Westrom at 651- 296-3826, or at sen [dot] torrey [dot] westrom

The Senate Agriculture, Rural Development, and Housing Committees heard three proposals of interest to rural Minnesota this week. Thursday, the E15-Better Fuel Initiative passed through the committee. It is authored by Senator Torrey Westrom (R- Elbow Lake), Chair of the Senate Ag. Finance Committee. The initiative is pushed by a strong rural coalition, including the Minnesota Corn Growers Association, Farm Bureau, and the Farmers Union, among other groups. It would increase the standard biofuel blend to a 15% ethanol blend in Minnesota’s gas, up from the current 10%. Ethanol is a biodegradable, homegrown, renewable fuel made from corn and has a higher octane rating than regular gasoline. Additionally, Minnesota’s ethanol industry supports nearly 19,000 full-time jobs in the state and generates more than 1.5 billion in income for Minnesota households.

“Ethanol is one of Minnesota’s only oil wells,” Sen. Westrom said. He added, “It’s a big economic engine for rural Minnesota. It strengthens the price for corn farmers and the leftover grain provides a great livestock feed. It’s a clean homegrown fuel that benefits our state in numerous ways, ranging from aiding our energy independence, cleaner vehicle emissions, and stimulating our local economies.” The bill passed unanimously through the Ag. Policy committee.

Senate File 3049, supported by Sen. Westrom and presented to the Ag. Committee this week, would provide a $30 million appropriation to the rural broadband development grant program. Rural Broadband grants have been a major focus in the Senate this year, as in past years. In 2019, $40 million was approved by the legislature to fund 50% matching grants for the next two years.

“Rural broadband is vital for rural residents, rural commerce, and economic development. It is ‘modern-day electricity,’ and is as important as rural electricity development was 80 years ago,” said Sen. Westrom.

A bill providing $50 million in bonding authority to the Rural Finance Authority (RFA) is moving through the Senate, as well. The bill, chief authored by Sen. Westrom, will make funds available to beginning farmers and those facing financial challenges in securing a traditional farm loan. RFA is Minnesota’s main agricultural lending arm and is almost one week away from running out of their current allocated bonding authority. It was established in the 1980’s during the “Ag. Crisis” and has proven a successful model for helping beginning farmers, or those in a cash crunch. The RFA is a user financed bond, so it does not rely on any taxpayers to help pay back the bonds. They partner with community banks to provide qualified farmers with lower interest rates. Sen. Westrom’s bill requires priority to be given first to beginning farmer loans, second to seller-sponsored loans, and third to agricultural improvement loans.