Cramer: Reining in the bureaucracy 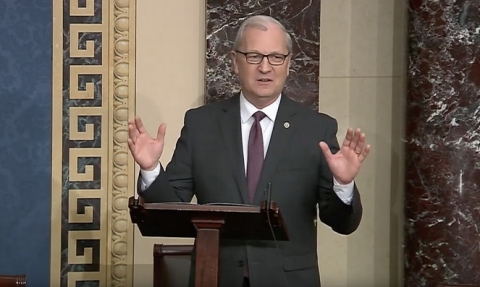 “Reining in a bureaucracy run rampant has been a top priority of mine since coming to Washington,” said Senator Cramer. “It has become abundantly clear the bureaucracy has evolved into an unelected, unaccountable creature. When constituents back home reach out to my office for help, there’s a good chance it has to do with an intransigent, unresponsive, or even aggressive, confrontational bureaucrat who’s forgotten a public servant is actually supposed to serve the public.”

In his remarks, Senator Cramer gave an overview of his efforts to reduce bureaucratic overreach and obstruction in the Army Corps of Engineers, USDA, and the Fish and Wildlife Service. He also offered his support for measures which face bureaucratic obstruction, such as the Trump Administration moving federal agencies closer to the people they serve and his efforts to honor the Lost 74 sailors of the USS Frank E. Evans whose names remain unlisted on the Vietnam Veterans Memorial.

“Now is the time to remind this city who holds that constitutional responsibility and authority. The people hold it,” concluded Senator Cramer. “We must dedicate ourselves to doing this so we can define our era as the time we stood up to the bureaucracy and reclaimed the true power of the federal government for the people they elect, not the bureaucracy they cannot sway.”