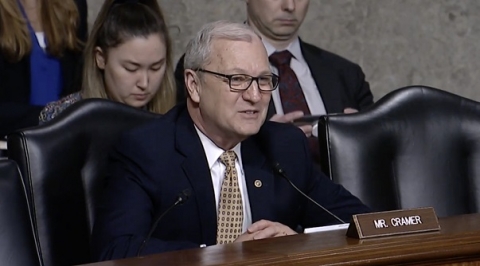 “The Air Force is asking us to divest critical intelligence, surveillance, and reconnaissance (ISR) gathering assets to allow for more investment in new technology and future ISR assets,” said Senator Cramer. “I am very aware of the critical role some of these legacy ISR assets have played in Central Command, even some from my state of North Dakota.”

“For me it comes down to a platform and that platform is the MQ-9,” responded General McKenzie. “That is the platform of choice in the Central Command Area of Responsibility. It is a platform that can gather intelligence, it can strike, it can do all kinds of things. It is a jack of all trades, and I would prefer to not divest of that resource.”

“I agree,” said Senator Cramer. “The MQ-9 is a remarkable asset.”

The MQ-9 Reaper is a drone developed by General Atomics and housed at Air Force bases across the country, including the North Dakota Air National Guard 119th Wing in Fargo known as the Happy Hooligans.

“I use space assets every day, every hour, in U.S. Central Command,” said General McKenzie. “We cannot survive without space assets.”