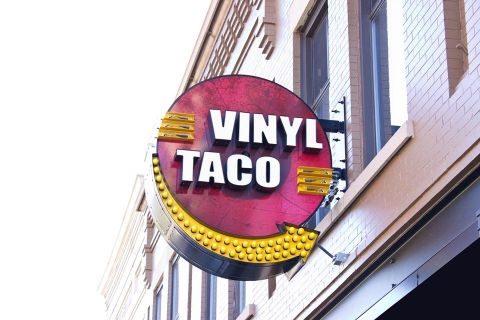 A local restaurant’s walk out of some employees, on Saturday, was a staged act, according to the co-owner of the restaurant.

Fargo’s Vinyl Taco co-owner, Lance Thorson, says the Fargo Forum newspaper published a story in Saturday’s edition on the walkout. Thorson says the newspaper did not receive any verification of the report prior to publishing the story, providing no fairness.

“It all was just staged news,” Thorson told WZFG’s Scott Hennen on What’s On Your Mind.

He says the Forum newspaper had known about the situation prior to its happening, posting a picture taken of two employees on a previous night. The newspaper called and left a message at Vinyl Taco’s main office, seeking comment, at 7:53 a.m. Saturday saying there was a mass walkout at the restaurant’s downtown location.

The Forum newspaper later called the manager of the downtown location looking for a comment. Thorson said the manager indicated that the newspaper’s call was the first time he had knowledge about the walk out.

“It all was a surprise to us,” the co-owner, Thorson, said. “We were really completely blindsided by it all.”

He says he doesn’t believe the Forum newspaper had no intent of getting the management’s side of the story before publishing the article. He says the newspaper has the contact information for the ownership, saying they have called them “for every other news story when it has to do with the restaurant and bar industry.”

The story originally reported 20 staff had walked out, but Thorson says the reality was that only three cooks in the morning walked out. Additionally, some employees did not show up for their shift in the afternoon.

“The Forum’s use of this sensation headline, to us, doesn’t pass the sniff test,” he said. “It was way overboard on their reporting to try and get people to read the article.”

One complaint causing the walking reportedly was unsafe conditions, to which Thorson says the employees hadn’t raised any concerns prior to Saturday morning’s publishing. On April 30, ownership held a meeting with staff to address any concerns and to discuss the safety procedures put in place. Only five employees showed up to the meeting and, in the week following the opening, no complaints were received by ownership in regard to unsafe conditions.

A chief concern was facemasks. The state health department does not require that masks be worn, but Thorson says staff are encouraged to wear them, and the business provides them if needed.

“We want everyone to feel safe when they dine in with us,” he said.