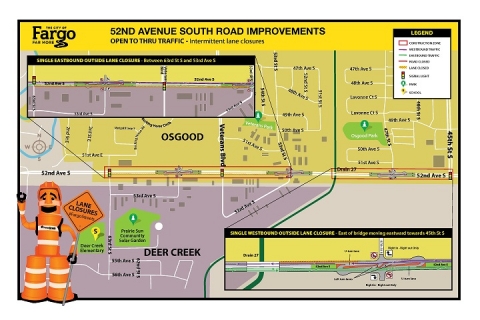 Starting this week, contractors for City of Fargo’s 52nd Avenue South roadway and infrastructure improvement project will resume work to complete carry over items from last year including multi-use paths and landscaping, as well as warranty work such as curb and road panel replacements. Motorists will experience intermittent lane closures along 52nd Avenue South between 45th Street South and west of 63rd Street South as project work requires.

Beginning Wednesday, May 13, motorists can expect the following traffic impacts along 52nd Avenue while crews are onsite:

-          Speeds will be reduced where traffic control is present

The lane closures are necessary to ensure worker’s safety during the installation of the new multi-use path and concrete pavement repairs needed on the curb and roadway.

All project work is slated to be complete by early July.

In 2019 crews began work on 52nd Avenue South construction to turn this roadway from a rural two-lane roadway to a four-lane divided roadway with dedicated turn lanes. The project benefits include:

o   Offers a well-defined access to the arterial roadway