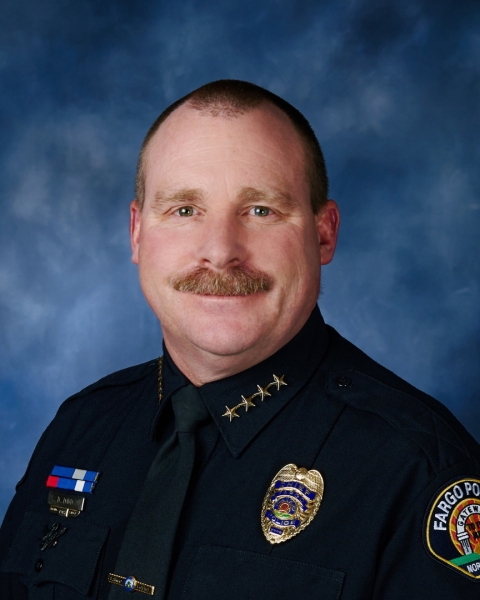 The Fargo Police Department and The City of Fargo are jointly announcing Chief of Police David Todd is retiring from the organization at the end of July 2020. Joining the Fargo PD team at the age of 22 in 1987, Chief Todd has served in the capacity as Chief since 2014. Since his appointment, Chief Todd has continually worked to enact his strategic plan of restructuring, hiring additional officers, ensuring competitive wages, a new centralized police station, community engagement activities, reforming departmental policies and creating a Fargo Police Academy.

Todd notified the members of the department today, and stated, “We have reached a point as a department where we have accomplished, or are near to accomplishing, the goals I had set out in front of us when I became chief. These are goals we have reached together as a team. I have known all along that once we reached this point, it would be important as the chief to ask myself this question: ‘Should I continue to lead or would the department be best served if I retire and let the next generation of leadership with new energy and ideas take the department to the next level of greatness?’” In a video statement to the community Todd said, “Although I’ll miss the people that work here, because I love them and I would miss being a cop, I already knew in my heart the answer to that question.”

Fargo Mayor Dr. Tim Mahoney said, “The impact of Chief Todd on the Fargo Police Department and our community is truly profound. Under his leadership, Fargo PD has evolved into a national leader in community-centric policing. The Chief presented us with a strategic vision and he steadfastly enacted it in a methodical manner. He built a tremendous team around him to take the Fargo PD to the next level. In times of tragedy, he rallied our community and in times of success, he was quick to offer credit to others on his team. Chief Todd is the epitome of a servant leader and I am tremendously grateful to him and his career of service to our community.”

To ensure the most robust and qualified pool of applicants, The City of Fargo will immediately begin a nationwide search for its next Chief of Police. Chief Todd has agreed to remain in his role until his successor has been hired to ensure a seamless transition.

“As the regional leader and North Dakota’s largest community, this is a critical position for our metro area and our state. Fargo is committed to hiring a candidate with the intelligence, compassion, strategic vision and leadership qualities this position requires to protect and serve our residents and visitors. Our next Chief will continue to be a reflection of the passion and determination that has been a trademark of the Fargo Police Department since its inception,” remarked Mayor Mahoney.