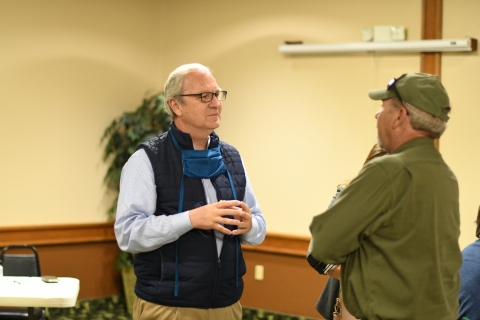 “The damage in Stutsman County is severe, disrupting the lives of residents and the farmers who need to access their fields,” said Senator Cramer. “After hearing the concerns of these residents, I am fully confident FEMA will soon make policy changes in order to follow the intent of President Trump’s disaster declaration of providing this area with the emergency assistance it needs.”

“Weather conditions these last eight to nine months have devastated our rural roads in central and eastern North Dakota beyond anything I’ve seen in my lifetime. It has created a serious public safety issue for those who live in these rural areas, not to mention the negative impact it will have on our North Dakota and local agriculture economy,” said State Senator Terry Wanzek. “I want to thank Senator Cramer for taking the time to come out and see this devastation firsthand and to listen to those who live there. Also thank you to Senator Cramer, Senator Hoeven and Representative Kelly Armstrong for trying to address the FEMA rule changes that have not been working in providing disaster relief funding for these people.”

“Today’s event is a shining example of how collaborative efforts between local state elected officials and statewide national elected officials can influence common sense changes to a one size fits all national policy, and how it’s able to respond reasonably to a more localized disaster,” said State Representative Craig Headland. “Although no final decision has been announced on possible changes, it’s crystal clear that Senators Cramer and Hoeven and Representative Armstrong - and their influence on any changes within FEMA - carried the day. We anxiously await FEMA’S decision.”

Road access in Stutsman County has been substantially degraded by recent natural disasters, putting at risk the health and safety of residents who now cannot reach emergency services. Farmers are also struggling as they try to access their fields in an already limited planting timeframe. To combat this, President Trump issued a major disaster declaration at the request of Governor Burgum and with the support of the congressional delegation, authorizing 75 percent federal reimbursement of the eligible costs of disaster response and recovery work undertaken by eligible applicants.

While FEMA had previously stated it will not consider submerged or inundated roads eligible for permanent repair until the water recedes and visible damages can be verified, officials participating in today’s event indicated they are following Senator Cramer’s request to change their policy in a way that is transparent and will allow these local governments to receive assistance.