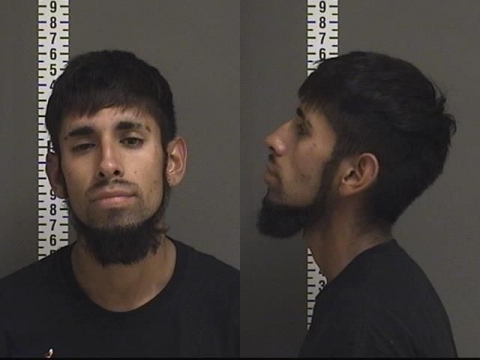 On Thursday morning, at 12:37 a.m., Fargo Police oficers were notified of a vehicle that the Clay County Sheriff’s Office was pursuing that had entered Fargo and exited off of westbound Interstate 94 at 25 St. S., and was traveling southbound with an original stop reason of speed.

A Fargo officer saw the suspect vehicle exit the off ramp on to southbound 25 St. S. at a high rate of speed. The officer did not engage in the pursuit but continued to watch the direction of travel. Officers were unable to locate the vehicle after continuing in the last known direction of travel.

At 12:47 a.m., the NDHP located the vehicle in the 2400 block of 24 Ave. S. unoccupied.
K9 Falco and his handler conducted a track where they located the suspect, identified as Andrew Jason Garza, 23 years old of Fargo, hiding on a porch in the 1800 block of 23 Ave. S. Garza was arrested for an open Cass County warrant, and held for the Clay County Sheriff’s Office on charges of Felony Fleeing, Careless Driving and Driving After Revocation.

A long form report for Possession of Methamphetamine, Reckless Driving and Driving Under Revocation in ND has been completed and forwarded for consideration of charges.