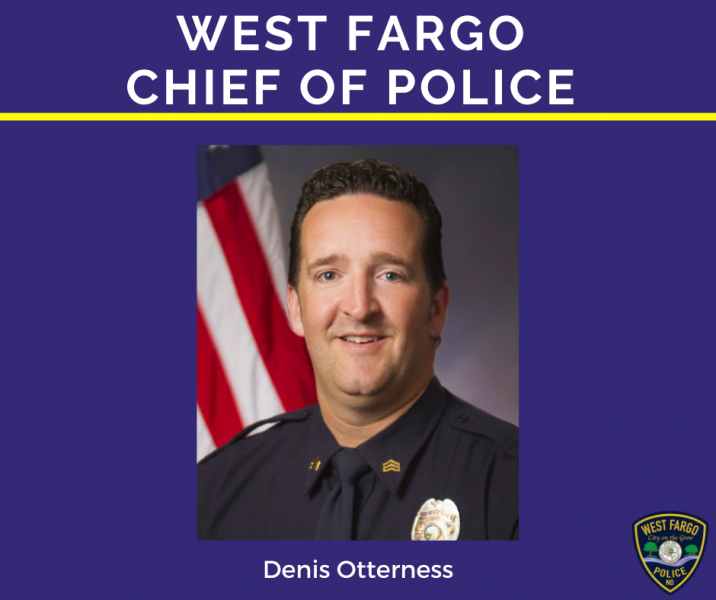 During the Monday, July 20, 2020, West Fargo City Commission meeting, the commission approved the recommendation of City Administrator Tina Fisk to hire Denis Otterness to become the next Chief of the West Fargo Police Department.

“Otterness has more than 29 years of sworn law enforcement experience in a variety of agencies which provides a well-rounded background to lead the department,” said Fisk. “His credentials and diverse experience will help the West Fargo Police Department continue to serve the community at a high level and help us maintain our title as the safest community in North Dakota.”

Otterness is currently the Montana State University - Billings Police Department Chief of Police and Emergency Management Director, which is a position he’s held since 2018. Before that role, Otterness served the Bloomington Police Department from 1998 through 2018. He started there as a Police Officer and worked his way up to Deputy Chief. Otterness has also worked as a Task Force Officer with the United States Drug Enforcement Administration, Adjunct Instructor with Normandale Community College and began his career as an officer with the West Fargo Police Department.

Otterness has a master’s degree in public safety and law enforcement leadership from the University of St. Thomas, a bachelor’s degree in sociology with a criminal justice emphasis from North Dakota State University and multiple leadership certificates.

A swearing in date and official start date for Otterness is contingent on the completion of his pre-employment screenings.