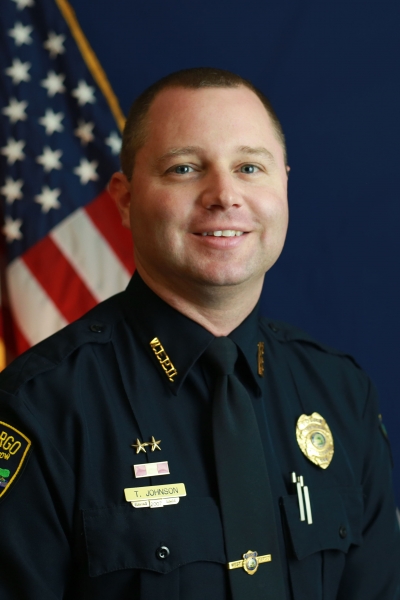 Ryan Haskell, Patrol Sergeant for the West Fargo Police Department, had this to say about Officer Johnson.

"I am writing to nominate Officer Travis Johnson for the AM1100 The Flag July Salute to Law Enforcement recognition.  Officer Johnson has recently returned to patrol from the investigations division and his peers and supervisors alike have repeatedly recognized positive attitude, his excellent work ethic, and his willingness to share his 15 years of law enforcement experience with younger officers.

In March of 2020, Officer Johnson returned to patrol on the evening shift.  Officer Johnson has been very active since returning to patrol and can regularly be seen assisting newer officers with their investigations.  Officer Johnson is rarely seen without a smile on his face and he maintains an infectious good mood throughout his shift.

In addition to his patrol duties, Officer Johnson is the lead advisor for the department’s Police Explorer’s Program.  Prior to becoming an officer, Johnson was involved with the Fargo Police Department’s explorer’s program.  His experience there led him to taking over the West Fargo program 11 years ago and helping to shape the future of law enforcement in the area.

Officer Johnson, we salute you!