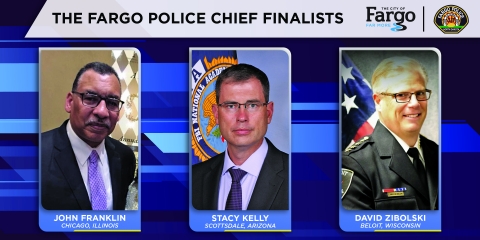 The City of Fargo Police Chief Selection Committee is announcing three candidates for advancement as finalists.

John Franklin, Stacy Kelly and David Zibolski have accepted invitations to the multi-day in-person interview process, with the Selection Committee conducting public interviews on August 20 in the Fargo City Commission Chambers. These interviews will be broadcast and livestreamed across The City of Fargo’s channels and multimedia platforms. The Police Chief Selection Committee will be asked to recommend a candidate to the City Commission at the conclusion of the interview process.

City of Fargo Human Resources Director Jill Minette stated, “The breadth of experiences and educational attributes of these candidates are of high caliber. In the next few weeks, we look forward to welcoming them to Fargo and assisting the Committee in its search to find the most qualified leader for the Fargo Police Department.”

A total of 26 applications were received for the position and reviewed by the Police Chief Selection Committee. The committee virtually met in executive session with seven candidates this week to discuss their applications.

The fifteen members of the Police Chief Selection Committee will make no further comments about the process at this time. Biographies of the finalists are listed below and a photo collage has been attached to this email, all of which are available for use by members of the media and the public.

John Franklin has worked in the law enforcement field for more than 30 years, beginning his career with the Chicago Police Department, serving as patrolman, sergeant, lieutenant and commander. Throughout his career as a Chicago Police Department supervisor, Franklin led several investigative units, such as Narcotics Conspiracy Teams, along with gang and gun investigative units. Upon his retirement from the CPD, he took up a new career as an adjunct professor of criminal justice at a college in Chicago. During that time, he was hired as the Chief of Police for the Village of Dolton, Illinois, a suburb of Chicago, where he served for two years. Franklin significantly lowered rates of burglaries and all incidents of violent crime in Dolton. In 2018, he accepted a new position as chief of police in the City of Jacksonville, a community in central Arkansas. Franklin led a progressive 60-person police agency in Jacksonville for 18 months. He holds a bachelor's degree in speech and media communications from Northeastern Illinois University, as well as a master's degree in social and criminal justice from Lewis University. Franklin is a graduate of Northwestern University's Center for Public Safety, School of Staff of Command.

Stacy Kelly currently works in the private sector as a strategic project manager in Scottsdale, Arizona, assisting police departments establish body-worn camera and TASER programs. Prior to that, he served as the assistant chief of police for the Newport News (VA) Police Department, which serves a population of 180,000 with an authorized complement of 440 sworn officers and 153 non-sworn personnel. While holding the rank of assistant chief, Kelly served as the patrol bureau commander and the administration bureau commander. While holding the rank of captain, he served as the Central Precinct commander and the personnel and support commander. As lieutenant, Kelly served as the first academy director and accreditation manager for the Newport News Police Department Training Academy. Under his command, the police academy obtained accreditation through the Commission on Accreditation for Law Enforcement Agencies (CALEA) and the Communications Division obtained initial accreditation leading to the agencies first ever Tri-Arc Award. Kelly is a graduate of the FBI National Academy and the Senior Management Institute for Police. He holds a bachelor’s degree from St. Leo University and a graduate certificate from the University of Virginia.

David Zibolski has served as the chief of police in Beloit, Wisconsin since June 16, 2015. During his tenure he led major organizational change within the department and its community that positively affected leadership and culture, strengthened community relations, and saw the integration of progressive technology and best practices, while making Beloit a safer city. He began his career with the Milwaukee Police Department where he served 27 years, working his way up the ranks and retiring at the rank of captain in 2011. He held a variety of patrol, investigative and specialty unit commands. As deputy administrator for Wisconsin DOJ’s Division of Law Enforcement Services (2011-2015), he had operational responsibility of a statewide division that included training and standards for law enforcement. Zibolski is a graduate of Northwestern’s School of Police Staff and Command #203, Police Executive Research Forum (PERF) Senior Management Institute for Police session #68, and is an International Association of Chiefs of Police (IACP) nationally certified Leadership in Police Organizations instructor. He holds a master’s degree in organizational management and leadership from Springfield College. In 2020, he was appointed vice chair of IACP’s Midsize Agencies Division and also serves on several community boards.