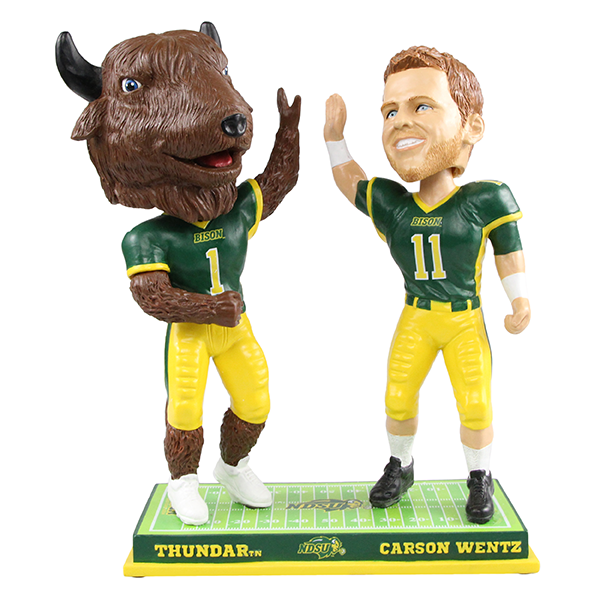 The limited edition bobbleheads, which are individually numbered to only 1,000, recently arrived and ship now. The bobbleheads are $60 each with a flat rate shipping charge of $8 per order. The bobbleheads were produced by FOCO and are officially licensed. These are the first bobbleheads produced featuring a player high-fiving their team’s mascot.

Carson Wentz was the most prolific quarterback in North Dakota State history before being selected second overall by the Philadelphia Eagles in the 2016 NFL Draft. During his five years at NDSU, the team won five NCAA FCS National Championships. Wentz became the starting quarterback during his junior year and led the Bison to National Championships in 2014 and 2015. Not only did Wentz excel on the field, but he graduated with a degree in health and physical education, finishing with a 4.0 GPA and earning Academic All-American Honors. After accumulating multiple NFL and Eagles rookie records during the 2016 season, Wentz led the Eagles to an 11-2 record in 2017 before a season-ending injury in week 14. His tremendous performance during the first 14 weeks of the season was instrumental in positioning the Eagles’ for their first Super Bowl Championship when they defeated the New England Patriots in Super Bowl LII.

The series of officially licensed bobbleheads features the following stars from MLB, NFL, NBA, NHL and the NCAA high-fiving their teams’ mascot:

"We’re always thinking of ideas for unique and fun new bobbleheads, and the High Five Bobblehead Series certainly fits in that category with the high five being the ultimate symbol of success and celebration,” said Phil Sklar, Co-Founder and CEO of the National Bobblehead Hall of Fame and Museum. “This inaugural group of players feature some of the biggest stars in sports, and Carson Wentz bobbleheads have been among our best sellers over the past couple years. We think Bison fans are going to love this new bobblehead which is the first featuring Carson with Thundar.”