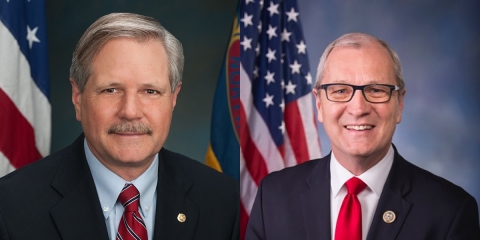 U.S. Senators Kevin Cramer (R-ND) and John Hoeven (R-ND) helped introduce the “Military Spouse Licensing Relief Act” today, a bipartisan bill requiring states to recognize the occupational license from another state of a service member’s spouse if the service member and their spouse are moved across state lines.

“Half of military spouses work in a field requiring licensing,” said Senator Cramer, a Senate Armed Services Committee member. “Our bill makes it easier for them to keep their jobs when they and their families are transferred to a different state. It is a common sense way to improve their livelihood and attract more talent to bases across the country.”

“Our military families make significant sacrifices in service to our nation, including entire households often having to relocate due to new military orders,” said Senator Hoeven, a Senate Defense Appropriations Committee member. “Our legislation would help ease the transition to a new state by providing reciprocity for military spouses who hold a professional license. This is one important step that we can take to support the families of our servicemembers and reduce disruptions in the lives of those who defend our nation.”

“Military families consistently rate Utah as a top destination to serve, and a big reason why is the work our state has done to make sure professional military spouses licensed in one state can also work in Utah,” said Senator Lee. “The American people absolutely depend on the brave men and women of our nation’s Armed Services, and the families of those brave men and women deserve all the support we can give them. This bill helps do that by making it easier for military spouses to work when they have to transition to a new duty station.”

Fargo Public Schools to work towards in-person instruction
1 hour 46 min ago
Moorhead Police identify man in suspicious death case
2 hours 17 min ago
The folks at Fix it Forward Auto Care are giving away their 250th car!
4 hours 13 min ago
Lt. Gov. Sanford clears the air. New guidelines are not a mandate or a misdemeanor.
4 hours 20 min ago
Who has the better tax plan, Trump or Biden?
4 hours 30 min ago
Michelle Fischbach: Don't believe everything you see on tv, there is a lot of garbage out there right now...
4 hours 40 min ago
Going on a hunting trip soon? Dr. Zimmerman tells us why getting an alignment may make things much easier...
4 hours 54 min ago
Sprinkler system extinguishes Fargo structure fire
October 18, 2020 - 11:59am
West Fargo Public Schools to remain in hybrid model
October 18, 2020 - 11:35am
Moorhead Police investigating suspicious death
October 18, 2020 - 11:02am