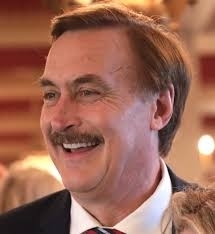 Earlier this week on WZFG Radio's "Need To Know Morning Show," My Pillow Founder and Owner Mike Lindell said he's "99.9 percent sure" that he'll run for the Governor's post, currently held by Tim Walz. Now, just three days later, Lindell is even more sure he'll be running for Governor of the State of Minnesota in 2022.

Appearing at a rally for President Donald Trump Friday night in Bemidji, Minn., Lindell told WZFG Radio's Scott Hennen there is now a 99.95 percent chance that he'll run for Governor. In the interview earlier this week, Lindell says Walz has mismanaged the COVID-19 situation in the state.

Several supporters of President Donald Trump appeared to be Lindell supporters, with many chanting for him to run for Governor.

"If I do run for Governor, I'm probably going to do it," he said. "Then you could have so much more control having the House."

No timetable has been set as to when a possible Gubernatorial campaign announcement could come.