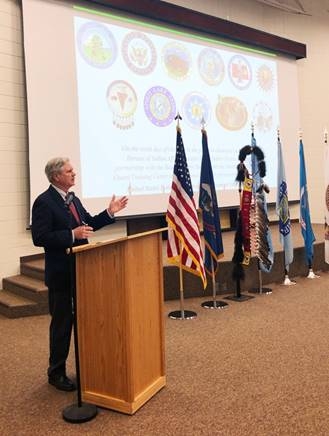 “This new law enforcement center started as an idea at a Committee field hearing on public safety in tribal communities that we held in Bismarck last year. Now, after our efforts to secure the funding needed to operate these courses, this center is a reality. Tribal law enforcement officials will have access to important training here in the Great Plains, closer to the communities where they live and serve,” said Hoeven. “This center will provide tribal law enforcement in the Great Plains area with the necessary training and skills to serve and meet the challenges in their communities, including investigating illicit drug crime and missing or murdered Indians. I appreciate the Trump Administration’s continued commitment to Indian Country, especially Secretary Bernhardt and Assistant Secretary for Indian Affairs Sweeney. Further, we welcome the partnership between the Department of the Interior and the State of North Dakota, working with Governor Burgum and Adjutant General Dohrmann, to find the right location. By bringing all levels of government together, tribal communities across the region will benefit from this center.”

The training academy originated through collaboration between several partners including Burgum, Hoeven, Davis, Dohrmann, the BIA, Department of Interior and tribal leaders. Hoeven hosted a field hearing of the Indian Affairs Committee in Bismarck in March 2019, during which Burgum testified about the need for a regional training academy to address the shortage of BIA officers in North Dakota and across the region, noting the central BIA law enforcement training facility is over 1,200 miles away in Artesia, N.M.

“This is a historic day for North Dakota and the safety of our people, our communities and our state. Providing this specialized training closer to home will create more opportunities for North Dakota tribal members and others to enter and complete law enforcement training and increase the supply of much-needed BIA and tribal police officers in our state and region,” Burgum said today. “Camp Grafton’s well-deserved reputation as one of the region’s premier training centers, thanks to our exceptional North Dakota National Guard, makes it an ideal location for this high-level training academy. We’re deeply grateful to Sen. Hoeven, Maj. Gen. Dohrmann, Scott Davis, the Department of Interior and BIA, and our tribal nations for their passion and commitment to making this academy a reality. We especially thank the chairs of the five tribal nations with whom we share geography for their ongoing collaboration and partnership built on understanding, mutual respect and a shared desire for safe communities.”