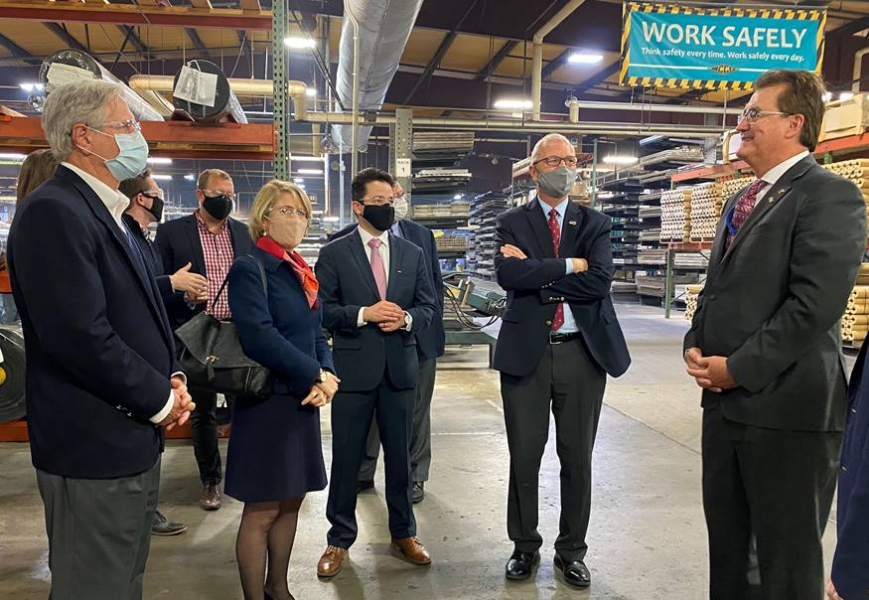 In a meeting with state and local officials and local industry representatives, Senator John Hoeven, along with Senator Kevin Cramer, yesterday discussed with Kimberly Reed, President and CEO of the U.S. Export-Import Bank (EXIM), the importance of exports to rural states like North Dakota and highlighted the services made available by EXIM to businesses in the state. EXIM operates at no cost to taxpayers and provides export credit insurance, working capital guarantees and commercial loan guarantees to help fill gaps in private sector financing. Hoeven helped confirm Reed and two other members of EXIM’s board of directors last year, enabling it to continue serving the nation’s exporters.

“The EXIM Bank is an important financing tool in the tool box to help small exporters stay competitive in the global marketplace,” said Senator Cramer. “I am glad Chairman Reed accepted my invitation to come to North Dakota so she can see firsthand the impact the EXIM Bank has on our economy and speak with our businesses and lenders about new opportunities to grow.”

This comes as part of Hoeven’s broader efforts to ensure the state’s businesses can access valuable foreign markets. These include:

“From agriculture to energy to manufacturing, exports are a key support for North Dakota’s economy,” said Hoeven. “In fact, agriculture serves as one of nation’s few sectors with a net positive balance of trade, with nearly $7 billion in ag exports coming from our state alone in 2019. Through institution like the Export-Import Bank and the USCS Rural Export Center in Fargo, we are working to continue growing our businesses’ access to overseas markets, which provide new opportunities for growth and investment. We appreciate Ms. Reed for learning more about our state’s businesses firsthand today and look forward to our continued work with the administration to build on the progress we’ve made with USMCA, the phase-one trade deal with China and ongoing negotiations with Japan, the EU and elsewhere.”

Through his role on the Senate Appropriations Committee, Hoeven secured $500,000 in Fiscal Year (FY) 2020 funding legislation to expand the USCS’s rural export capabilities and worked to ensure the funds benefitted the existing Rural America Intelligence Service for Exporters (RAISE) program in Fargo. This enabled the USCS to formally establish the REC, which now houses the RAISE program, hire more workers and increase its output. Hoeven previously sponsored bipartisan legislation directing the USCS to establish this center in a non-metropolitan area, and he continues advancing the bill to formally authorize appropriations for the REC and help secure funding in future years.

Hoeven has been urging administration officials to resolve its trade negotiations as soon as possible, including with Japan and the EU. This follows the senator’s work to advance the:

U.S.-Mexico-Canada Agreement (USMCA), which went into effect in July.

Phase-One Trade Agreement with China. Hoeven joined the president and Chinese leaders for the signing of the agreement in January.

Under the agreement, China committed to increase purchases of U.S. agriculture goods to $40-50 billion in 2020 and 2021, including crops like soybeans and wheat, but also beef, pork and dairy.

The agriculture purchases are part of an overall commitment by China to increase purchases of all U.S. goods over a 2017 baseline by $200 billion over the next two years.