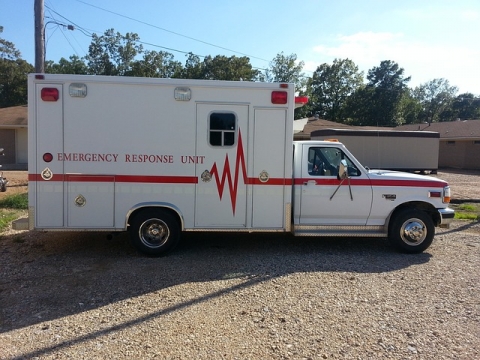 According to the North Dakota Highway Patrol, a 2018 Ford ambulance, driven by 32-year-old Michael Wicklund, of Fergus Falls, Minn., was transporting a patient in a Grant Robert Ambulance from Sisseton, South Dakota, to Sanford Hospital in Fargo. The ambulance turned southbound onto Veterans Boulevards from westbound I-94 with its emergency lights and siren activated.

Wicklund lost control of the ambulance on the icy overpass bridge deck and struck the west curb, causing the ambulance to roll on its side.

31-year-old Evan Bertsh and 21-year-old Jaadon Ries, who were in the back of the ambulance caring for the 34-year-old male patient, were injured.The Highway Patrol says the patient was sedated and it is unknown if he suffered further injuries in the crash.

Wicklund was not injured.

Fargo Public Schools to work towards in-person instruction
41 min 38 sec ago
Moorhead Police identify man in suspicious death case
1 hour 12 min ago
The folks at Fix it Forward Auto Care are giving away their 250th car!
3 hours 8 min ago
Lt. Gov. Sanford clears the air. New guidelines are not a mandate or a misdemeanor.
3 hours 16 min ago
Who has the better tax plan, Trump or Biden?
3 hours 25 min ago
Michelle Fischbach: Don't believe everything you see on tv, there is a lot of garbage out there right now...
3 hours 36 min ago
Going on a hunting trip soon? Dr. Zimmerman tells us why getting an alignment may make things much easier...
3 hours 50 min ago
Sprinkler system extinguishes Fargo structure fire
October 18, 2020 - 11:59am
West Fargo Public Schools to remain in hybrid model
October 18, 2020 - 11:35am
Moorhead Police investigating suspicious death
October 18, 2020 - 11:02am