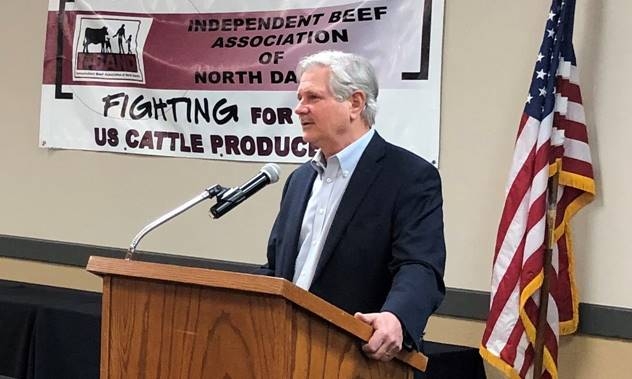 Senator John Hoeven today addressed the Independent Beef Association of North Dakota’s (I-BAND) annual meeting, where he outlined his efforts as chairman of the Senate Agriculture Appropriations Committee and a members of the Senate Agriculture Committee to help ranchers overcome the challenges of severe weather, low commodity prices, trade disruptions and COVID-19. Hoeven has worked to secure assistance for the nation’s agriculture producers, with North Dakota’s livestock producers having received nearly $213 million in Coronavirus Food Assistance Program (CFAP) and CFAP 2 payments to date.

The senator is advancing this temporary assistance and working with the administration to ensure it serves producers as effectively as possible, with the goal of getting back to stable production conditions. At the same time, Hoeven continues his efforts to ensure fair and transparent pricing for the nation’s cattle producers.

“Our ranchers deserve a market that gives them a fair price for their product, and that’s exactly what we’re working to provide, both through our efforts with calling for the DOJ investigation and the upcoming Livestock Mandatory Reporting reauthorization,” Hoeven said. “At the same time, we are providing temporary assistance to support producers through an unprecedented series of challenges. This is all about ensuring ranchers can maintain their operations until conditions improve and, with more fair and transparent pricing, empowering them to continue providing the highest quality, lowest cost food supply in the world.”

Hoeven is advancing the following efforts to support cattle ranchers and improve pricing and transparency in the beef market:

Hoeven secured $9.5 billion of direct funding to assist farmers and ranchers as well as $14 billion in Commodity Credit Corporation (CCC) funding in the Coronavirus Aid, Relief and Economic Security (CARES) Act. The senator then worked with USDA to advance the initial CFAP payments and to ensure the CCC funding was used for CFAP 2. Hoeven also held regular meetings with North Dakota producers and USDA officials, including Farm Service Agency (FSA) Administrator Richard Fordyce, to facilitate feedback to the administration and make sure the program works for farmers and ranchers.

Under CFAP 2, ranchers will receive $55/head for the highest number of cattle in inventory between April 16 and August 31. Sign-up for the program runs until December 11, 2020.  Additional information on CFAP 2 is available from USDA at www.farmers.gov.

In addition, Hoeven worked to include a full reimbursement of the CCC in the continuing resolution passed earlier this fall. On multiple occasions, Hoeven led his farm state colleagues in securing support for the CCC reimbursement on the Senate floor, citing a letter signed by more than 40 farm groups calling for funding the CCC. This helps ensure producers don’t face delays in vital Farm Bill programs, including the Livestock Forage Program and Livestock Indemnity Program.