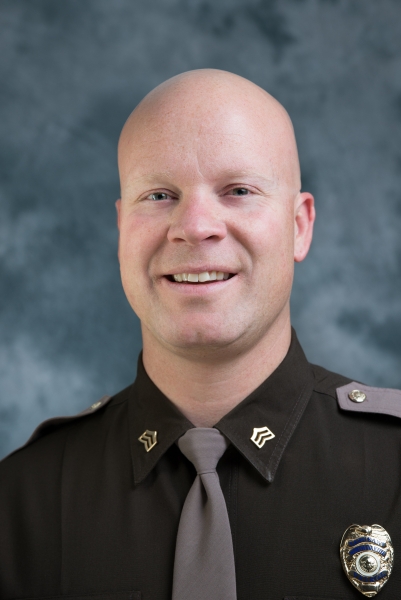 Sgt. Hendrickson is an 18 year veteran of the ND Highway Patrol (NDHP).  Luke started his career as a traffic trooper in Devils Lake before transferring to Fargo in 2006.  In Fargo, he has held the role of traffic trooper, K9 trooper and was promoted to regional sergeant in 2013.  Sgt. Hendrickson is committed to the NDHP mission of “making a difference everyday…”  Luke strives to make a difference through his actions while interacting with the public during traffic stops, safety talks, CMV roadside inspections, crash investigations, highway assists and while assisting other agencies at other types of incidents.  Sgt. Hendrickson also makes a difference with those he leads in this department.  He sets the example with his support and fulfillment of the NDHP core values of loyalty, integrity, commitment, respect, professionalism and accountability.  Luke would never ask something of someone he is not willing to do himself.

Sgt. Hendrickson has been a member of the NDHP Emergency Response Team (ERT) for approximately 15 years.  His current role on this team is Assistant Commander.  The NDHP ERT is a volunteer team of NDHP members that are trained in crowd control, search and rescue, and dignitary protection.  Luke has been instrumental in the success of this team and the forward progress they have made in their training and available equipment to meet their mission.  In 2013, Sgt. Hendrickson received the NDHP Colonel’s Award of Excellence for his service during a protest event in Leith, ND.

Sgt. Hendrickson is committed to making a difference with our fellow law enforcement brothers and sisters in North Dakota and surrounding states as well.  He has spearheaded efforts to teach other ND law enforcement agencies crowd control tactics and has been to surrounding states discussing crowd control tactics.  Luke was the President of a ND Peace Officers Association (NDPOA) and served on the executive committee of the NDPOA for several years.  During his time on the executive committee and while president, he assisted with efforts to provide access to beneficial training to ND law enforcement and helped modernize the association.

Outside of work, Sgt. Hendrickson and his family are active in their church.  Luke participates in local Cops N Kids Christmas shopping programs, the Salvation Army Red Kettle Campaign and has participated in bean bag tournaments at a local assisted living community.  I am proud to nominate Sgt. Hendrickson for this award, as he sets an excellent example for his peers and for the public we work with each day.