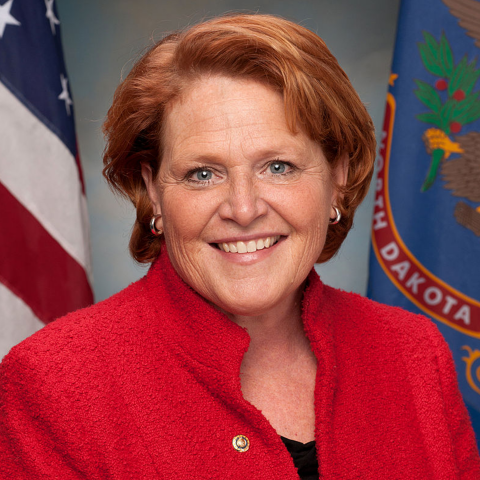 Despite the President’s willingness to sit and negotiate with anyone — even a dictator such as North Korea’s Kim Jong Un — Democrats refuse to come to the table to negotiate deals with him. The President even welcomed Democrats to come to the White House last week to address our broken immigration system. But they didn’t come. Not one.

This is why we need to expand the GOP majorities in Congress in the midterm elections this fall — so President Trump has more leaders willing to make deals to help the American people.

It’s also why he wants a change in North Dakota by defeating Senator Heidi Heitkamp in November. Senator Heitkamp portrays herself as friendly to President Trump in campaign ads, but when it’s really mattered the most, she’s sabotaged the President — and the interests of North Dakotans.

Earlier this month, President Trump tweeted, “Congratulations to @KevinCramer on his huge win in North Dakota. We need Kevin in the Senate, and I strongly endorse him. Heidi voted NO on our Tax Cuts, and will always vote no when we need her. Kevin is strong on Crime & Borders, big on Cutting Taxes!”

In addition to standing in the way of President Trump’s transformative agenda, Heitkamp’s liberal values clearly put her at odds with the average voter in North Dakota. The Senator favors liberal immigration reform that would dilute the job market and put our communities at risk from criminal illegal aliens. She also voted against banning abortion after 20 weeks, even though infants can survive outside of the womb at that stage of development. She also voted against the confirmation of Betsy DeVos, Trump’s Education Secretary, just because DeVos supports school choice.

Congressman Cramer, on the other hand, has voted with President Trump 98.7 percent of the time, according to FiveThirtyEight.com. The Congressman voted in favor of tax reform and a Farm Bill that would provide support to North Dakota’s farmers. Cramer also supported the President’s efforts to fix Obamacare and voted to ban abortion after 20 weeks. Unlike Senator Heitkamp, Congressman Cramer voted in support of a measure to deport and deny admission to immigrants who are suspected gang members.

North Dakota has reaped tremendous benefits from President Trump’s successful policy agenda. We can’t allow Senator Heitkamp to take those benefits away from us and reverse the process.

North Dakotans have received the largest average tax cut of any state in the nation thanks to President Trump’s historic Tax Cuts and Jobs Act. And North Dakota is one of 14 states to see record low unemployment following the President’s job creating economic plan.

The state has also added over 1,000 new manufacturing and over 5,000 new mining jobs since President Trump entered the White House, according to the Bureau of Labor Statistics.

Thanks to President Trump, North Dakotans have more new job opportunities — and more of their hard-earned dollars left over in their pockets — than they’ve had in years. With a consistent record of resisting the President at every turn, Senator Heitkamp will continue to oppose the very agenda which created these amazing results.

In Donald Trump, North Dakotans finally have a President who knows that midwesterners are more important than bankers in New York, celebrities in California, and lobbyists in Washington.

We simply can’t afford to let Senator Heitkamp and the Democratic leadership in Congress reverse the amazing progress we’ve made in North Dakota. Let’s send a new Senator, GOP nominee Congressman Kevin Cramer, to Washington this fall to make deals with President Trump and support his agenda to Make America Great Again and keep it that way.

Brad Parscale is the campaign manager for Donald J. Trump for President, Inc.