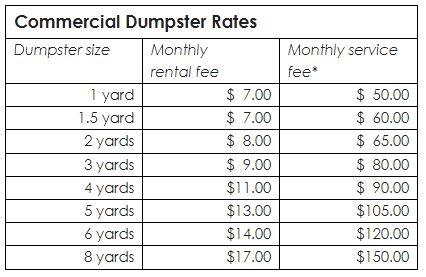 *Monthly service fee listed is based on one dumpster service per week.

The City of West Fargo has released the 2019 sanitation rates. Beginning Jan. 1, 2019, residential rates for single-family units will adjust from $13 per month to $17.50 per month. The rates were adjusted after an analysis of the current structure found the fees collected were less than the cost to provide the services.

Staff also found that the cost of service for single-family residential and multiple-family residential customers were different and that the new rate structure needed to better match the cost to service these buildings. To reach that goal, multiple-family buildings, like apartments, will now be charged according to the commercial account rate structure, which was also revised. The cost of service for these types of structures is more consistent with commercial buildings than single-family residences. Multiple-family buildings will also be charged $5 per month for each unit in the building. Occupants of these buildings should speak to the property owner or manager to determine how the change in rates will impact them.

Roll-off service rates were also adjusted. During the fall analysis it was discovered that rates had not been increased since the inception of the program in the 1990s. The new rates include the roll-off pull rate, which is changing from $65.00 to $160.00, and $43.00 tipping fee per ton, which is set by the City of Fargo landfill. During the analysis the new rates were found to be consistent with the rates of private roll-off service providers. In 2019, the City of West Fargo is also allowing roll-off customers to seek and use an outside vendor to service their roll-off needs. The city will retain the franchise on commercial dumpsters.

The City of West Fargo also released its sanitation and recycling 2019 holiday schedule. The City of West Fargo will not pick up garbage on the following holidays: New Year’s Day, Good Friday, Memorial Day, Independence Day, Labor Day, Veterans Day, Thanksgiving, Christmas Eve and Christmas Day. If the holiday falls Monday through Thursday, the pick up for that holiday will be the following day. If the holiday falls on a Friday, the refuse will be picked up Thursday.

Waste Management, Inc., who the City of West Fargo contracts to collect recycling, will not pick up recycling on the following holidays: New Year’s Day, Memorial Day, Independence Day, Labor Day, Thanksgiving and Christmas Day. Recycling will be picked up the day following each holiday. All additional days for that week will also be one day behind. Weeks with a holiday will conclude with Friday recycling being collected Saturday.