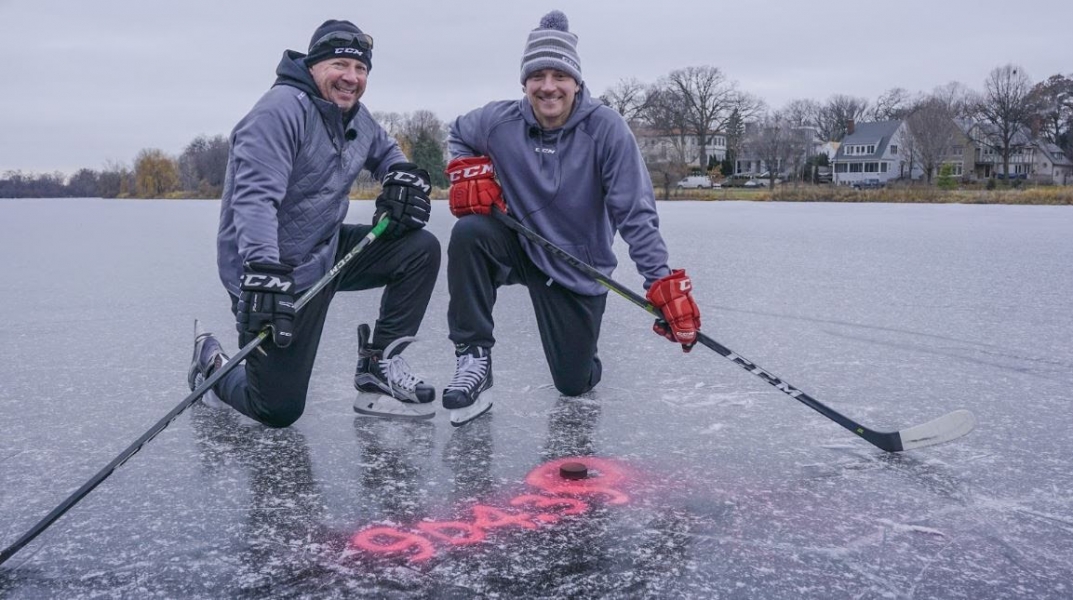 Zach Lamppa and Tom Chorske proudly announced today they have broken the Guinness World Record for longest hockey pass. The record pass took place on Nov. 20 of last year on the pristine early ice of Lake of the Isle in Minneapolis. A recently posted YouTube video of the record breaking pass has garnered attention from across the hockey world, including an interview on the NHL Network.

Lamppa who grew up in Virginia, MN, and now resides in Detroit Lakes, MN said that the record was broken to prove that anyone is capable of doing great things.

“I’ve always wondered how far I could actually pass the puck in perfect conditions,” said Lamppa. “We did this to inspire people. You never know what’s possible until you try.”

On his first official attempt Lamppa shattered the old record of 894 feet with a pass that traveled 904 feet and three inches. On the receiving end of the record pass was Minnesota hockey legend Tom Chorske, a former Golden Gopher star and Stanley Cup Champion.

“The people at Guinness make the terms,” said Lamppa. “We had to have regulation equipment, a survey crew, and officials. It’s not just something you can just go out and do, you have to plan. There’s a criteria you must meet.”

Lamppa hopes that this record can inspire others.

“As a person and a father of four hockey players, hockey has given me so much,” he said. “I am not the greatest player in the world, but this challenge helped me to prove that if I can do it, anyone can do it.”

While Lamppa doesn’t know how long the record will stand, he hopes it will give others inspiration to break the record or break another record in another sport or activity.

“We are just two friends who got together to try and do something great,” said Lamppa. “We are coming up on some of the best time of year for hockey and we hope this accomplishment will show others that good things can happen to anyone.”