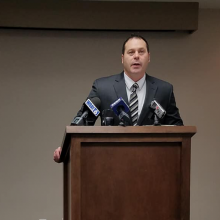 Cass County Sheriff Jesse Jahner tells WZFG News that two suspects from an incident in Jamestown are still at large, after their vehicle was found in Cass County.

The incident happened at Walmart in Jamestown. A pursuit ensued, stretching onto I-94, where the Highway Patrol took charge. The vehicle was lost in the pursuit.

The vehicle was found in the Absaraka area, Jahner said. The suspects were gone.

“We are still searching for the two suspects,” he told WZFG Radio.

He advises anyone who sees anything to call 9-1-1.

1 hour 25 min ago
Detective Seth Saarinen, We Salute You!

Fargo Public Schools announces changes to instructional plan
47 min 7 sec ago
Detective Seth Saarinen, We Salute You!
1 hour 25 min ago
Steve Moore shares how the White House is helping businesses re-open.
1 hour 46 min ago
September 2020 Salute to Law Enforcement: Detective Seth Saarinen
1 hour 48 min ago
Michael Betrus: I don't understand how our leaders are making some of these decisions...
1 hour 53 min ago
Outdoors Angle: Early Waterfowl Season Tips
2 hours 44 min ago
Scott Hennen At A Peaceful Protest?
2 hours 53 min ago
How would a mask mandate be enforced? We consult Commissioner Gehrig.
3 hours 16 min ago
Edwin Hahn tells us what he is hearing from folks out on the campaign trail.
3 hours 23 min ago
Fargo's 10th Street North lane closure set for Tuesday
4 hours 20 min ago