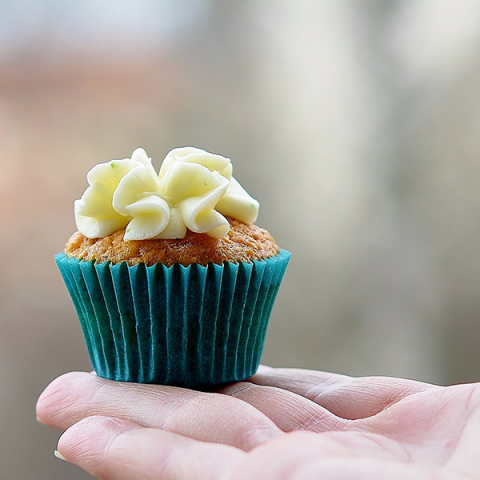 It’s cupcake vs. cupcake in a school food fight okay’d by the principal!

WHAT:       Cupcake Making and Decorating Contest

Students in the Davies High School Family and Consumer Science (FACS) Culinary Academy classes are in the midst of an exciting part of their baking unit. The students will face off Thursday, April 25 to see who can create the best cupcake in a contest patterned after the hit show “Cupcake Wars” on The Food Network. Approximately 48 FACS students will compete as teams, each composed of three or four students.

Teams have been required to use two “secret” ingredients in their cupcake recipe, revealed to them during the trial-run baking phase of the contest, which took place in class on Monday. The teams baked their final cupcakes during class on Wednesday.

On Thursday, students will decorate their pre-baked cupcakes and plate them for a judging panel. As in the television show, the contest is themed. The theme for this year’s contest is “Never-Ending Winter,” so final cupcake presentations must reflect that subject in some way. The judges will rate the final cupcakes on the criteria of taste, appearance, and the use of the theme and secret ingredients.

Fargo Public Schools to work towards in-person instruction
1 hour 55 min ago
Moorhead Police identify man in suspicious death case
2 hours 26 min ago
The folks at Fix it Forward Auto Care are giving away their 250th car!
4 hours 22 min ago
Lt. Gov. Sanford clears the air. New guidelines are not a mandate or a misdemeanor.
4 hours 29 min ago
Who has the better tax plan, Trump or Biden?
4 hours 39 min ago
Michelle Fischbach: Don't believe everything you see on tv, there is a lot of garbage out there right now...
4 hours 49 min ago
Going on a hunting trip soon? Dr. Zimmerman tells us why getting an alignment may make things much easier...
5 hours 3 min ago
Sprinkler system extinguishes Fargo structure fire
October 18, 2020 - 11:59am
West Fargo Public Schools to remain in hybrid model
October 18, 2020 - 11:35am
Moorhead Police investigating suspicious death
October 18, 2020 - 11:02am