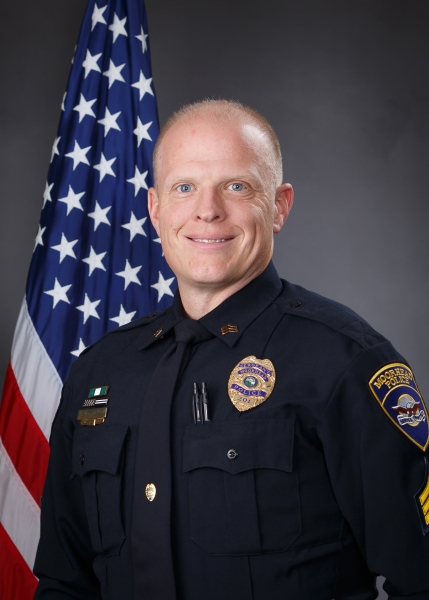 It is with great pleasure that we nominate Sergeant Scott Kostohryz as the member of the Moorhead Police Department as the representative for The Flag Salute to Law Enforcement.  Sgt. Kostohryz has established himself not only as a productive, forward thinking officer, he is now mentoring many of our officers as he hands over the reins of many programs he helped develop within the department as his current role as a supervisor.  Sergeant Kostohryz is also an extremely active member of the community and works with several organizations that focus on supporting youth in our community.

Sgt. Kostohryz started his law enforcement career in 2000 with the Mankato, MN Department of Public Safety.  He joined the Moorhead Police Department in 2004. While a patrol officer he was involved in the following areas: Field Training Officer, Bike Patrol, Defense Tactics Instructor, Honor Guard, Compliance Checks, and much more.  Sgt. Kostohryz was instrumental in establishing the Cops and Kids hockey game, and re-establishing the Moorhead Police Explorer Program where he was also a State of MN Board Member.

In 2012, He was promoted to the rank of Sergeant.  While in his current role he has assisted in leading the School Resource Officer Program, Honor Guard, Field Force, and Defensive Tactics.  He also served in Investigations from 2017-2019. Recently, Sergeant Kostohryz also established the non-profit Moorhead Police Athletics and Activities League.

We are very proud of his continued efforts serving the community of Moorhead.