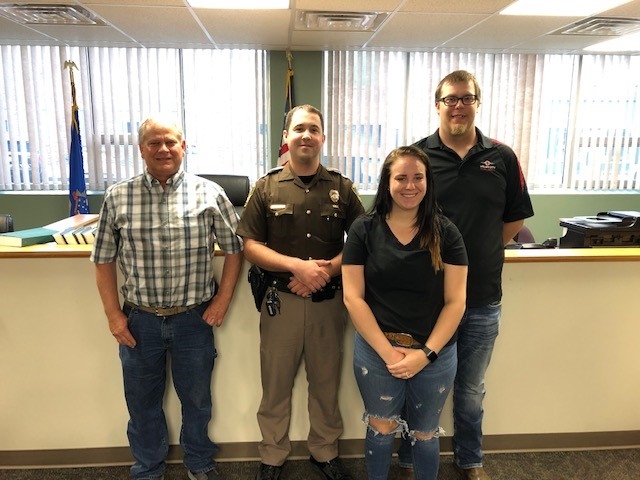 On August 2, 2019, John Triebold, Kassidy Tibke, and McKenzie Norland were presented the North Dakota Highway Patrol (NDHP) Colonel’s Award of Excellence. The award presentation occurred at the Valley City Police Department.  The award was for their heroic actions at a crash scene near Valley City on June 9, 2019.

On June 9, 2019, emergency personnel responded to a one vehicle rollover crash on I-94 at Exit 298, about four miles east of Valley City. A Ford Dually pickup had rolled while traveling eastbound on I-94. The driver was unrestrained and ejected from the vehicle. The Ford landed on top of the driver, with only the driver’s head and shoulders visible. The truck was crushing the driver’s chest, abdomen and legs. The driver was unresponsive when law enforcement arrived, and he was not breathing.

Shortly after the arrival of law enforcement, Kassidy Tibke, McKenzie Norland and John Triebold arrived on scene. Tibke and Norland were driving past the scene when they stopped to provide assistance. Triebold lived near the crash scene and observed the crash occur. All three sprung into action to assist law enforcement. Triebold quickly ran home and retrieved a telehandler, driving it to the crash scene. Once on scene, the telehandler was used to pick the Ford off the driver, so he could be removed, and medical assistance could be provided. After the driver was removed from under the Ford, Tibke and Norland began to provide CPR. CPR was successful and the driver began to breathe on his own. The driver was transported to Sanford Hospital in Fargo for severe injuries. The driver continues to recover from those injuries today, but is alive thanks to the quick and herioc actions of Triebold, Norland and Tibke.

Trooper Jackson Loeffel was the investigating officer and nominated Tibke, Triebold and Norland for the Colonel’s Award of Excellence. Trooper Loeffel advised “the actions of the three directly contributed to the driver in this crash surviving his life-threatening injuries.” Trooper Loeffel went on to acknowledge “the three were not obligated to provide assistance but chose that day to save another person’s life. Their actions were heroic and worthy of being honored.”

Colonel Brandon Solberg, Superintendent of the NDHP, agreed with Trooper Loeffel’s recommendation and awarded Tibke, Triebold and Norland with the Colonel’s Award of Excellence.