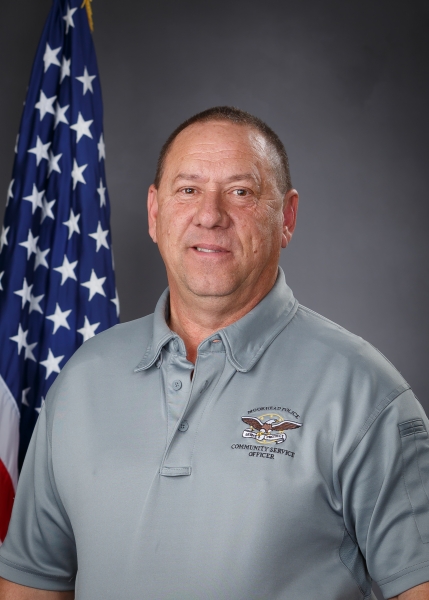 "Community Service Officer Harvey Moos came to the Moorhead Police Department in 1990. He has gained respect and friendships with employees within the Moorhead Police Department and many departments within the City throughout the years.   He has also earned respect and complimentary words from many citizens who met Harvey because he helped them while they are in need.

Harvey's supervisors describe him as always available to assist his peers and the community.  He consistently demonstrates a strong commitment to the department, but more importantly, helping our community.

CSO Moos deals with angry dogs, cats, citizens, and parking complaints.  He has been sprayed by skunks too many times to count, deals with severe weather while trying to unlock a citizen's car, works diligently to keep the wheels moving in our fleet, and organizes our police auctions.   Harvey will do his job throughout those conditions and still laugh afterward.

We thank Harvey for his years of dedicated service and compassion for his community.   He has spent many years volunteering his time in our community, with many of his activities supporting youth.  Since the early 2000s, he has instructed countless individuals in firearms, snowmobile, and ATV safety programs.  He is an active member of the Clay County Trailblazer's Snowmobile Club and is a past Cubmaster and Assistance Cubmaster for America's Boy Scouts.

Harvey is a long time Moorhead resident, married to his wife Penny for 38 years, has two adult boys, Dustin and Cameron, daughter in law Kelly, five grandchildren, Brayden, Caysen, Athena, Karly, and Karter.  Harvey is known for his extensive Christmas light display every year and enjoys spending time outdoors, especially at the lake.

On behalf of the Moorhead Police Department's entire staff, we all proudly nominate Community Service Office Harvey Moos for The Flag's Salute to Law Enforcement."