(Fargo, ND) -- Starting Monday, the North Dakota Department of Transportation will begin a painting project on I-29 Exit 42 at the Walcott Interchange bridge.

This work is part of a series of painting projects along the I-29 corridor that will prevent corrosion and improve bridge integrity for drivers.

Beginning early morning April 5th, motorists can expect the following traffic impacts along I-29 at the Walcott bridge:

Approximately one week later, traffic control will switch to the inside lanes in both directions. Motorists will stay in this traffic pattern for 2-4 weeks.

When finished, crews will move to Exit 54 at Davenport followed by Exit 56 at Horace and Exit 78 at Argusville. Motorists can expect to see similar traffic patterns at each location. Work at each interchange will last 2-4 weeks, and the full painting project will be completed by the end of June.

As always, NDDOT is urging motorists to always be attentive, drive with caution and expect delays during active construction. 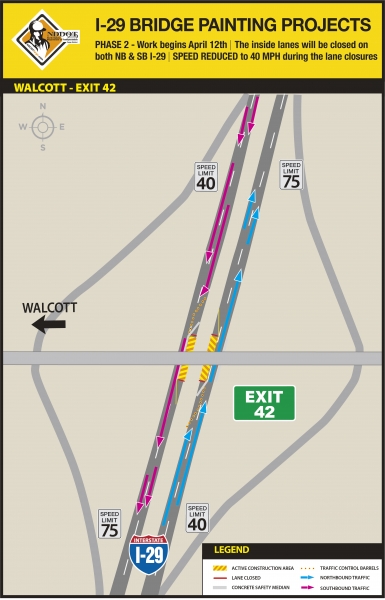