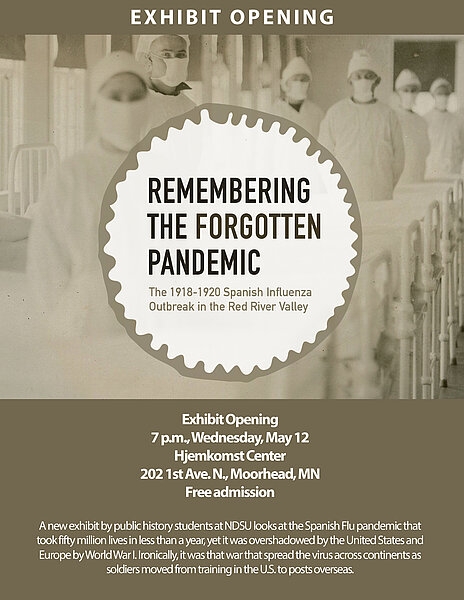 (Fargo, ND) -- A new exhibit by public history students at NDSU looks at the Spanish flu pandemic that took 50 million lives in less than a year but was overshadowed in the United States and Europe by World War I.

The exhibit, “Remembering the Forgotten Pandemic: The 1918-1920 Spanish Influenza Pandemic in the Red River Valley” opens at 7 p.m. on Wednesday, May 12th, at the Hjemkomst Center in Moorhead.

The exhibit makes use of diaries, letters, telegrams, transcripts of oral histories and newspaper accounts from the era. A recollection shared in the 1970s was from Henry Smeims, who was a farmer's son from the Red River Valley. He was just a boy when he came down with the flu.

"The thing I remember the most is the fever. Boiling up, and there wasn't a thing the doctor could do about it," Smeims said.

Throughout the Red River Valley, it took the cooperation of schools, churches and local governments to slow the spread of the highly contagious epidemic. Schools and universities closed, and students were quarantined. Church services were canceled, and several church basements were set up as hospitals for flu patients. Nursing students volunteered to assist other medical personnel in treating patients. Fargo and Moorhead issued closing orders for all businesses and the public health officer overseeing the effort urged housewives to make masks for people to wear if they had to go outside their homes.

“The parallels with the pandemic in 1918 and the Covid-19 pandemic that the world is struggling with today are striking,” Smith said. “Students have found many documents, advertisements and other records that show the same things that were called for then—quarantines, masks, closing entertainment venues from movie theaters to pool halls—are called for today.”

The public is invited and there is no charge for admission. The exhibit is a product of NDSU’s museum studies class lead by Angela Smith, associate professor of history, and will be open through August 30th.