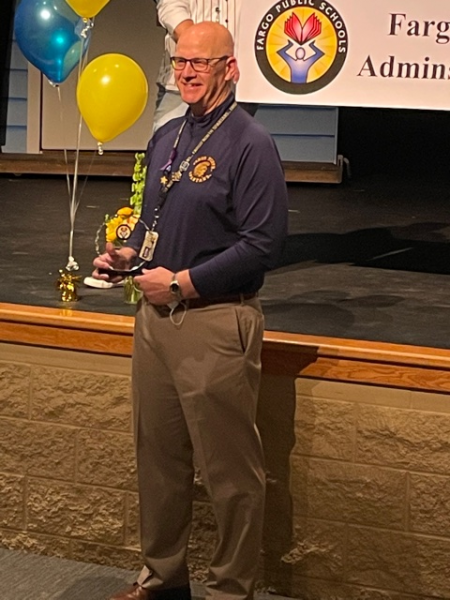 Dahlen has served Fargo Public Schools for nearly three decades as the North High School principal. He assumed his role during the 1993-94 school year and has been in this position ever since. Prior to leading North High School, Dahlen held the associate principal position at Grand Forks Central High School. Other previous professional roles include being the athletic director for the Grand Forks Public School District and spending eight years as a mathematics teacher at Red River High School.

Dahlen received his education at the University of North Dakota in Grand Forks, earning a Bachelor’s Degree in Mathematics and a Master’s Degree in Educational Administration. During his time at UND, he was a standout student athlete on the football team and has since been inducted into the Hall of Fame. Dahlen received his lifetime teaching certification license in 2018 after completing 30 years of education and is set to retire from his successful career at the end of the 2020-21 school year.

Dahlen’s Administrator of the Year nominations describe him as a champion of Fargo Public Schools and North High School. Dahlen’s leadership abilities are attention grabbing to his staff members. He makes time for his employees and encourages staff members to take breaks to help foster their personal lives and care for their mental health. One nominator described his style as “the epitome of what leadership books and podcasts discuss.” He makes all team members feel cared for and important. Additionally, teachers report that staff morale is extremely high at North High School because of Dahlen’s servant leadership and finesse.

Dahlen has also guided North High School to excel in academics and activities, leading the school to offer a multitude of clubs and teams that often exceed other school’s offerings. Additionally, he inspires teachers to make a greater difference in their students’ lives, instituting a school improvement plan that asks teachers to embrace and “adopt” students who are at-risk due to low attendance, poor academic achievements, or other factors. This helps the school make greater connections with students and realign their futures. Dahlen has never ceased his primary duties of helping students learn. He is often seen in the commons areas around North High School helping students with their mathematics lessons.

Dahlen has also served on several district committees, most recently as a member of the COVID-19 Instructional Committee, helping guide the District in its learning plan through the pandemic. Additionally, he has been instrumental in developing a professional learning community schedule for each building and department across FPS. Dahlen is also well-respected from his peers and the Class A Principal Organization, recently serving as the president of the North Dakota High School Association.