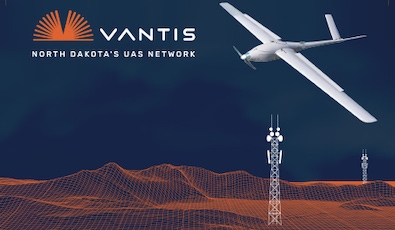 (Grand Forks, ND) -- Governor Doug Burgum recently signed into law an additional $20 million investment to continue the buildout of Vantis, North Dakota’s statewide UAS network, the first of its kind in the nation. North Dakota has been a leader in unmanned aircraft systems advancements for over a decade, but Vantis is poised to transform the state into the nation’s drone epicenter.

“We’re incredibly grateful to have leaders in this state – Governor Doug Burgum, Lieutenant Governor Brent Sanford, our legislators – with the foresight to imagine and invest in the vision of Vantis,” said Nicholas Flom, executive director of the Northern Plains UAS Test Site (NPUASTS). “It’s not an exaggeration to say that Vantis is a groundbreaking initiative. It simply doesn’t exist at this level anywhere else in the U.S.”

Currently, the Federal Aviation Administration requires operators who want to fly UAS beyond visual line of sight of the pilot to have a special and currently limited waiver. Receiving this waiver requires a significant investment of time and resources, making it a considerable barrier to entry for BVLOS flights. This means that most UAS operators can only fly within about a half mile of where they’re standing, which is incredibly inefficient. Vantis is a network made up of radars, other surveillance sensors, and command and control radios that allow UAS pilots to “see” from the perspective of the drone, much like a manned pilot in a cockpit. Vantis will be useable by anyone – state and other public entities as well as commercial interests – who meets minimum safety criteria, opening the door to advanced BVLOS flights and the opportunities created by them.

This significant investment, supported by our administration and approved by the Legislature, sends a strong signal that we are committed to building on North Dakota’s status as the nation’s proving ground for UAS testing, training and commercialization,” Gov. Doug Burgum said. “By continuing to build out Vantis, we will lay the groundwork for the next wave of UAS innovators and entrepreneurs, diversify our economy and benefit all North Dakotans, including those in our critical agriculture and energy sectors.”

NPUASTS, which administers Vantis, received $28 million two years ago to create and develop a statewide BVLOS network. Since then, NPUASTS has worked with leaders in the manned aviation industry to develop Vantis’ technology and to build out key sites in McKenzie and Williams counties. NPUASTS is currently conducting testing and validation to ensure that all flights on Vantis meet the highest safety standards. This additional $20 million, along with carryover from the initial investment, will be used to expand this technology to other areas in the state.

“This continued investment ensures that Vantis can benefit the people and industries across North Dakota,” said Jim Cieplak, program manager for Vantis at NPUASTS. “We’ve established key sites on the western side of North Dakota, but this funding will allow us to begin the larger rollout of Vantis, so that North Dakotans can reap the greatest economic benefits of this technology.”