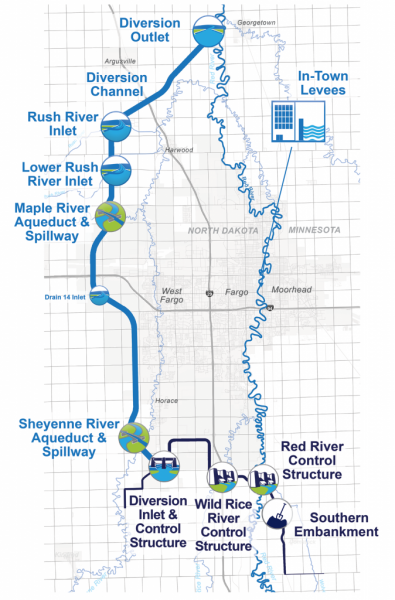 (Fargo, ND) -- Some good news, from the federal level, on the status of funding for the F-M Diversion Project.

Senators John Hoeven and Amy Klobuchar Wednesday announced that, through their efforts with Acting Director of the Office of Management and Budget Shalanda Young, they have secured $437 million of U.S. Army Corps of Engineers funding for the construction of permanent flood protection in the Red River Valley. With this award, the project has now received the complete federal funding commitment of $750 million.

Hoeven and Klobuchar have been working closely with OMB to advance this award and recently met with Director Young and local leaders from the Fargo-Moorhead region to make the case for fully funding the project. The senators, along with Senators Kevin Cramer and Tina Smith, also raised these priorities with Young in a letter sent in November.

“This $437 million fulfills the entire federal funding commitment for the project, providing certainty that it will be built on or ahead of schedule and ensuring the Red River Valley is permanently protected against the threat of flooding,” said Senator Hoeven. “This project is the first in the nation to use the P3 model, making today’s funding announcement a tremendous milestone for the Fargo-Moorhead region and an example the Army Corps can use for other projects nationwide.”

Wednesday’s announcement builds on Hoeven and Klobuchar’s past work to advance permanent flood protection in the Red River Valley. Last year, the senators reviewed these efforts in a roundtable with state, local and Army Corps officials in Fargo and discussed progress on the I-29 grade increase and the initial excavation of the Red River Control Structure site.

“This is a major win for the entire Fargo-Moorhead community,” said Senator Klobuchar. “With this federal funding, we will be able to continue construction on the Fargo-Moorhead Flood Diversion project and provide permanent flood protections for more than 200,000 people. I’m proud to have partnered with Senator Hoeven to secure this investment and will continue advocating to ensure flooding problems in the area are addressed in a timely manner.”

Work on the Diversion has already begun, with early estimates that work should be wrapped up by 2027.