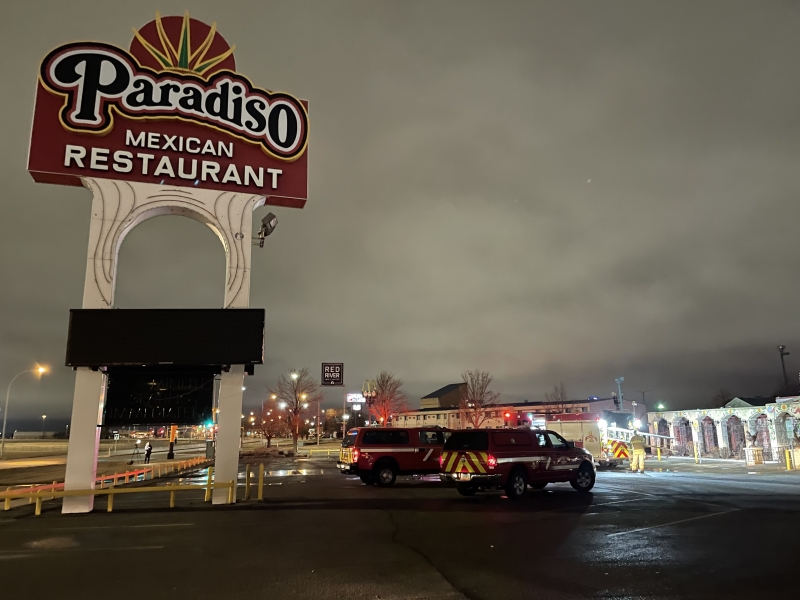 (Fargo, ND) -- A South Fargo restaurant is picking up the pieces after a fire ripped through the front of the building, even spreading to the roof.

The Fargo Fire Department says it responded to Paradiso Mexican Restaurant around 3 a.m. Wednesday morning to reports of smoke coming from the front door. Firefighters then pulled hose lines from their truck and were able to extinguish the fire after forcing entry into the building and opening an exterior wall and part of the roof. Crews searched the building and confirmed there was no one inside. The fire was stopped before it could extend to other parts of the building.

"It was a good thing we got here as quick as we did," said Fargo Fire Captain Mason Krueger. "It could have been a lot worse. It is repairable."

As for the business, General Manager Neil Clause says the damage wasn't as bad as he thought when he was woken up to a call early Wednesday.

"I closed up and left around 11 last night, normal night," said Clause when talking with WDAY Radio. "I just automatically assumed it was going to be a lot worse. I'm grateful the fire station is right around the corner."

Clause did say he hopes to have the restaurant up and running again as soon as Thursday. Damage estimates have come in at around $150,000.

The cause for the fire remains under investigation, though Clause does say it looks like it was an electrical issue that sparked the flames.