Deputy Ron Kind, we salute you! 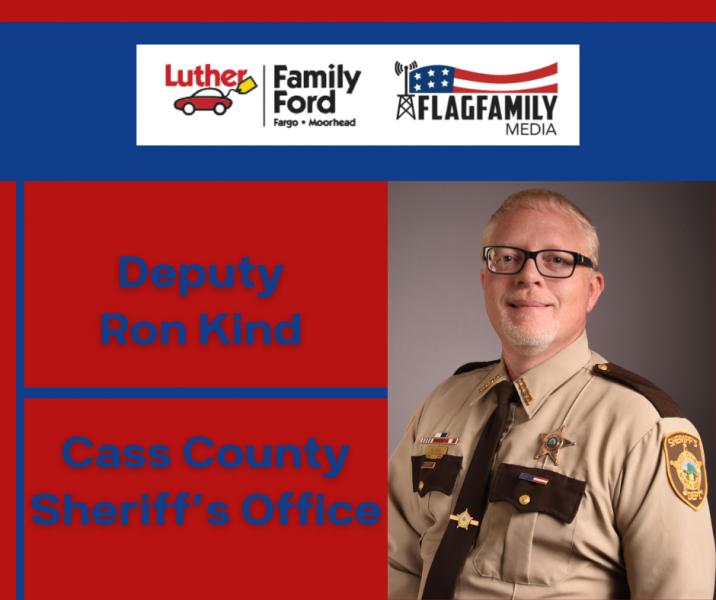 Deputy Ron Kind was born in Glasgow, MT, and raised in Fargo, ND. As a 1988 graduate of Fargo North High School, Ron enlisted in the US Navy and served his country for nine years.
After an Honorable Discharge, Ron began his career with 3D Specialties/Dakota Fence Company. Ron is currently a Construction Manager, overseeing projects throughout ND, SD, and MN.

In 2010, Ron attended the Cass County Sheriff’s Office Citizen’s Academy. While in the Citizen’s Academy, Ron discovered the Sheriff’s Reserve Unit.
Later that year, Ron was selected to begin training and was sworn in as a Reserve Deputy. In 2013, Ron completed Field Readiness Training, allowing Ron to assist the Field Services Division and Corrections Division.

Ron currently has over 7,000 volunteer hours as a Reserve Deputy. Ron works special events, including the Red River Valley Fair, Parades, Community Festivals, and Dances.
Ron also assists the Corrections Division working in the Cass County Jail and the Patrol Division working behind the wheel of a squad car.
The taxpayers of Cass County have been saved more than $200,000.00, because of Ron’s commitment to the Sheriff’s Office.

In 2014, Ron was nominated by his peers and selected by Sheriff Paul D. Laney as the ‘2014 Reserve Deputy of the Year.’

In 2015, Ron distinguished himself above and beyond the call of duty, involving a substantial risk to his own life, when he ran into a residential fire to save a family.
For Ron’s heroism, he was awarded the Cass County Sheriff’s Office Medal of Valor.

Ron has often said he is thankful for the opportunity Sheriff Jesse Jahner has continued to provide him as a Reserve Deputy serving the citizens of Cass County.

We salute you Deputy Ron Kind!