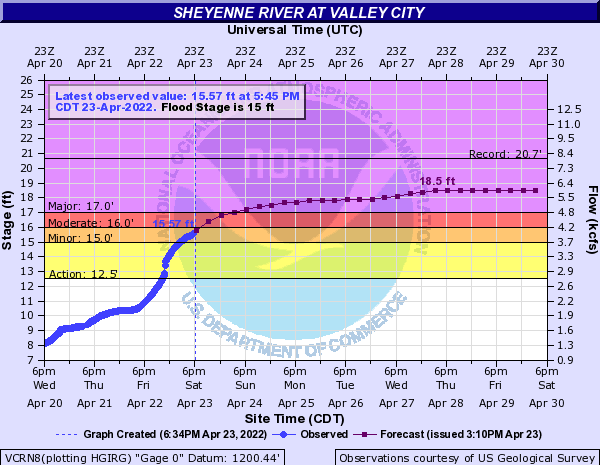 (Valley City, ND) -- Valley City Mayor Dave Carlsrud says the community is lucky it has permanent flood protection in the wake of nearly two inches of rain since Friday.

"If we didn't have the permanent flood protection we have," Carlsrud said, "we would be in a hurt bag."

The Sheyenne River currently sits at just over 15.5 feet, with moderate flood stage at 16 feet and major flood stage at 17 feet. The river is anticipated to crest at 18.5 feet on Thursday, and remain at that level through Friday into next weekend.

"We are okay at 18.5," Carlsrud said. "We put down enough clay to have three feet of freeboard."

City officials are also watching the snow that is being blasted from the western side of the state, where Harvey had four feet of snow. The Sheyenne River basin extends to Harvey, according to Carlsrud.

With all of the variables, Carlsrud said he is not worried.