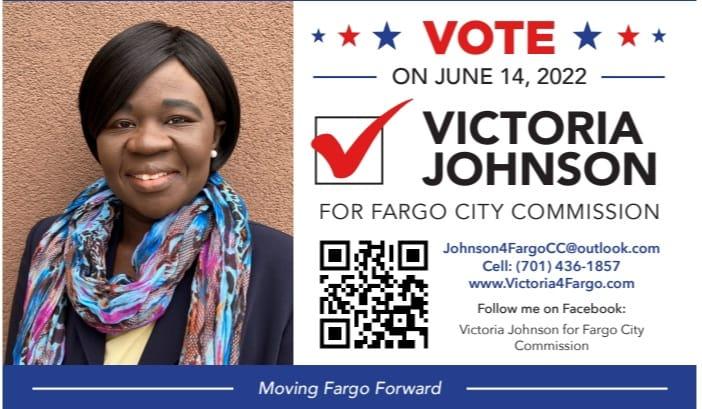 (Fargo, ND) -- A hope for change is what is driving one Fargo City Commission candidate in her quest to take one of the two open seats in the upcoming election.

Victoria Johnson says her campaign is centered around change in not only what a city commissioner looks like, but how they approach the position.

"When you have the same elected official servicing over and over and over, we get comfortable," said Johnson speaking on WDAY Midday. "We forget that we're not seeing growth, we're voting on name recognition. I'm looking to change that."

Johnson says representation for women and women of color is also what drives her to win one of the seats this June, but she adds she loves numbers and wants to reduce the tax burden felt by residents in Fargo.

"A conversation that we need to start having as a city is things like schools being funded by the state," said Johnson, who also wishes to abolish TIFs and special assessments to further open the playing field for smaller businesses to thrive in the city.

Johnson also says she would be in favor of a ward system, but only if the number of city commissioners is increased to at least seven, and the voters in Fargo wish to change how representation is balanced inside the commission.

To find out more about Victoria's campaign, and for your full June 2022 local election information, click here.