Lieutenant Brad Penas, we salute you! 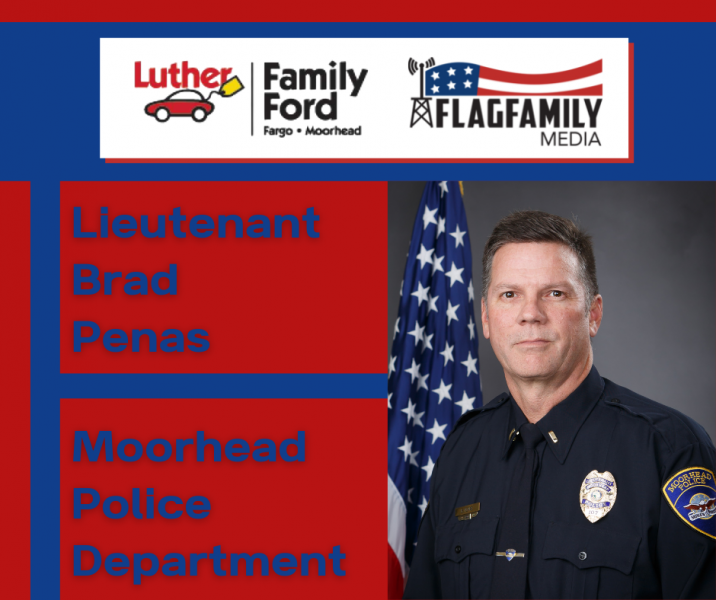 Lieutenant Brad Penas grew up in Greenbush, MN. He received his law enforcement training at Northland Community College in Thief River Falls, MN.
Lt. Penas began his law enforcement career at the Clay County Jail and was hired by the Moorhead Police Department in 1990.

Brad is currently the longest-serving sworn member of the department as he recently entered his 32nd year of service in Moorhead, with 23 of those years being in supervision.

Lieutenant Penas is currently the Investigative Division Commander. He oversees General, Juvenile, and Narcotic Investigators in his current role and serves as an advisor and department representative on several regional committees.

Lt. Penas supervises our background checks for several city license requirements and internal hires.
Brad understands the need for collaboration with our community partners and works hard to build those relationships.

Lieutenant Penas is also involved in many daily & behind the scenes activities crucial for our department operations.
He also supervises our School Resource Officers.

Brad enjoys many outdoor activities away from work, such as golfing, fishing with his wife, and hunting, including harvesting a Minnesota State Record Elk!
Brad also enjoys vacations with family and friends to scenic areas. Brad's pride is his family, consisting of his wife, Kari, son Ty, daughter Jensen, son-in-law, and one granddaughter.

Lieutenant Brad Penas, we salute you!