Officer Wesley Booth, we salute you! 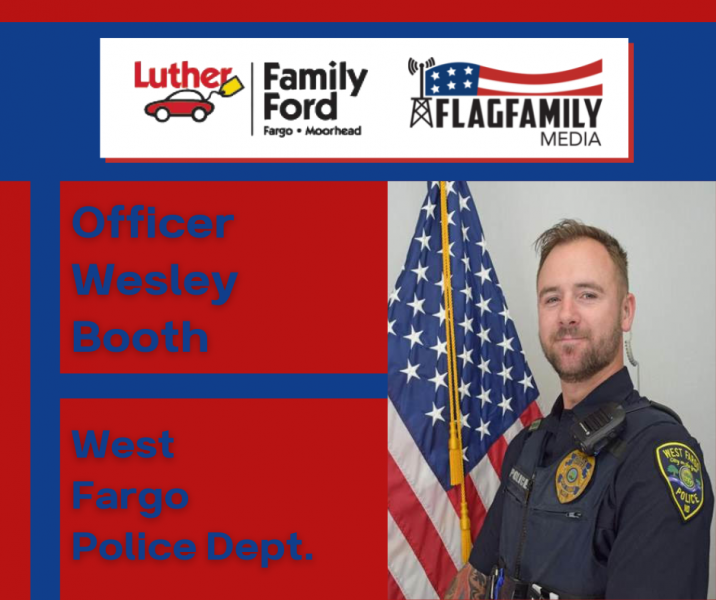 Officer Wesley Booth grew up in the small town of Pahrump, NV, which is just outside of Las Vegas.
In 2010, he graduated from Cinco Ranch High School in Katy, TX. After high school, he attended Norwich University in Vermont where he graduated with a Bachelor of Arts Degree in Criminal Justice in 2014.
From there, Officer Booth went on to serve in the United States Army. He was hired as a Police Officer in Leesburg, Virginia in November 2018 and graduated from the Northern Virginia Criminal Justice Training Academy in June 2019.
He moved to the West Fargo area in April of 2020 and worked at Marvin Windows until being hired by the West Fargo Police Department June 14, 2021.
When not working Officer Booth likes to spend time with his wife, read, play video games, make hot sauce, go to the gun range, and play golf.

Officer Booth has shown great commitment to the West Fargo Police Department and the citizens of West Fargo through his proactive Traffic Enforcement efforts. Officer Booth was recently selected to serve in the West Fargo Police Departments Traffic Enforcement Unit.
Officer Booth is working diligently to grow this unit into much more than the previous Truck Regulatory Unit. Officer Booth works on traffic safety details, investigates traffic-related complaints, truck regulatory details, and crash investigations, collects speed data around town utilizing radar boxes, as well as setting up our speed trailer in various neighborhoods. Officer Booth has future dreams to grow the program by adding Vehicle Fatality Crash Investigation and Motorcycle Patrol. Officer Booth is a great team player, often helping out his fellow Officers on patrol by responding to calls and taking reports if needed.