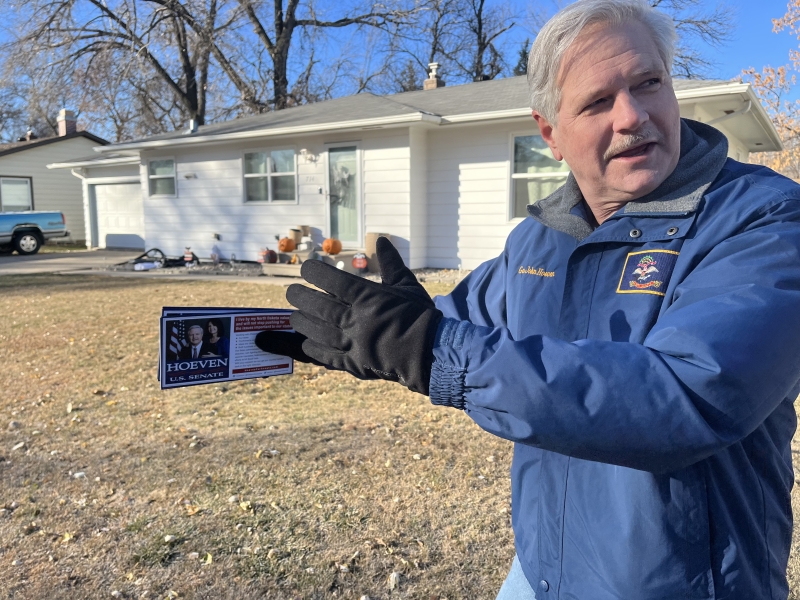 (West Fargo, ND) -- North Dakota's U.S Senator and multiple North Dakota prospective and soon to be legislative leaders are door knocking today to share their campaign message ahead of the General Election on November 8th.

"We're out here with our great legislators, and we are going to do a little door-to-door, " said Hoeven, "It's an honor and a privilege to serve. We love this, we like getting out and talking to people."

Hoeven criticized the Biden Administration on multiple topics, but pushed back against them the hardest on their energy policies. He says the current administration is working to "handcuff" the energy industry in North Dakota and across the United States, which he says has a direct impact on state residents.

"He's holding up leases on federal lands, both on shore and off, and then he says 'oh, well you have leases, the company should produce the leases they have', but they can't because he is holding up the permits," said Hoeven, "He won't give us the permits, and when we get the permits, we're held up in court."

Lee, Jonas, and Schauer are all running unopposed in District 13. Hoeven's election is contested by Democrat Katrina Christiansen and Independent Rick Becker.

Election Day happens on November 8th. You can learn more about voting in North Dakota by clicking here.

Mund, Becker get nod from Secretary of State to appear on November ballot
Fri, Sep 9th, 2022 - 10:45am
Cass County District Judicial Candidate David Chapman: "I'm not one who wants to make it up as I go along... I [will] enforce the law as it's written"
Tue, Oct 25th, 2022 - 7:38pm
Moorhead School Board Incumbent Keith Vogt: "We need to focus on the people" to support educators and students
Wed, Sep 21st, 2022 - 7:42pm
Moorhead City Council Candidate Siham Amedy is prioritizing community engagement, government transparency, and affordable housing in election bid
Fri, Oct 14th, 2022 - 1:31pm