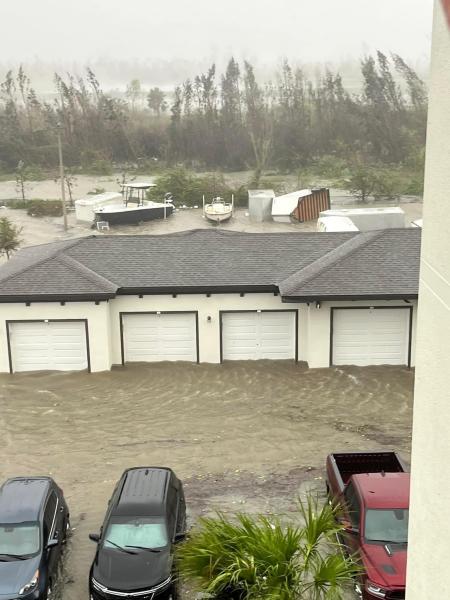 (Fargo, ND) -- A Minnesota native who has lived through his fair share of natural disasters says luck struck him and his wife again at their home in Fort Myers Beach this past week.

"This building we're in is supposed to withstand a Category 5 storm," said East Grand Forks native Mike Daniel. "It did just that. But if that storm lasted for another hour, the roof would have been off this place."

Daniel, who lives just a few miles away from where the eye wall of Hurricane Ian struck near Fort Myers, told WDAY Radio's Bonnie and Friends there were multiple times where he feared for his life.

"We watched buildings get disintegrated," said Daniel. "I literally told my wife get ready to die, we're going to die."

Daniel has lived through the flood of 1997, a bridge collapse and even a tornado that ripped his home apart in Hugo, Minnesota. Now, he must pick up the pieces after another disaster.

To this point, dozens and dozens of deaths have been reported from Hurricane Ian, while damages estimates are in the billions. As for aide, Daniel says he and the people in his area have got none so far.

"As of this morning, not one person with a government agency or anything has been here. I bought a generator and all this food before this came and people thought I was crazy, but I just had a bad feeling about this storm. My apartment has become kind of a 'command central' for everyone." He says at one point he had around 30 people inside his apartment.

Looting has also started, which prompted Mike to get his wife to safety in Tampa Bay, which turned out to be a 14 hour drive thanks to highway shutdowns and other issues.

Power remains out for a large portion of Southwest Florida, with crews still working to restore it where they can and are able.

Recovery from the storm is expected to take months, if not years.

If you wish to help out those in Mike's apartment complex or area, you can give to a GoFundMe set up by clicking here.