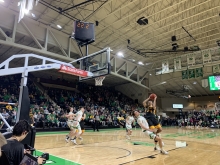 A thriller at the Betty Engelstad Sioux Center in Grand Forks ended with the upset-minded University of North Dakota Fighting Hawks downing the NDSU Bison men's basketball team in Summit League men's basketball action. Marlon Stewart got a bucket late in the contest, and the Fighting Hawks held on for a 71-68 win over NDSU in front of a capacity crowd at the Betty on Saturday night.

NDSU held a slight two-point lead at halftime, but UND stayed with them and cruised to a win.

Tyson Ward had 24 to lead the Bison, while Vinnie Shahid added 14 points.

WZFG Radio's Chris Larson caught up with Bison head coach David Richman after the game, and that interview is located above.