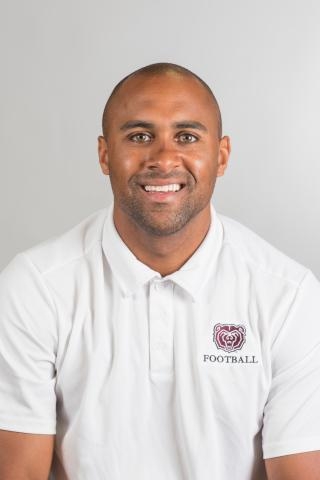 Ray joins the Bison after spending the past three seasons in the Missouri Valley Football Conference at Missouri State (2016-17) and Northern Iowa (2015). He also has six years of experience coaching at the Football Bowl Subdivision level.

Prior to joining UNI, Ray spent two seasons as an assistant coach at Oklahoma State mentoring the Cowboys’ receivers and return specialists for teams that appeared in the Cotton Bowl (2013) and won the Cactus Bowl (2014) under head coach Mike Gundy.

Ray spent four years at Wyoming under head coach Dave Christensen, where he was the running backs coach from 2009 to 2011 before moving to wide receivers coach in 2012. The Cowboys participated in the New Mexico Bowl twice, winning in 2009.

Ray was a second team Academic All-Big 12 wide receiver at Missouri, where he was part of four different bowl-qualifying teams from 2003 to 2007 including wins in the Independence Bowl (2005) and Cotton Bowl (2007).

He was president of Mizzou’s Student-Athlete Advisory Committee and a captain on the 2007 football team that won the Big 12 North championship, set a school record for wins (12), and garnered the program’s first No. 1 national ranking in 47 years.

Ray graduated from Missouri in December 2007 with a bachelor’s degree in marketing and a minor in English.